In order to increase the percentage of players not only creating a base, but also building a base, we made the "build base" button more prominent. Historically the "build base" button is located in the PLI command of any planet at the very end of the tile. If a new player plays in a small window or a non-fullscreen browser tab, the button is not visible because the contents of the tile don't fit entirely, and only after scrolling down, does it reveal itself.

To fix this, we added the BS command to the starting screen, and if there are no bases yet, it shows a "build base" button. We will be monitoring the respective statistics to see if this change has an effect.

While we were at it, we also implemented another idea, that we had during these chats. Why not help the new players getting started with their base with a separate, base related screen? This makes it way easier to unload the initial cargo of their ships to the base's inventory and find all the base related commands. So, right after a player builds a base, we automatically create a new starting screen for that base. It has the ships' inventories, the base overview, production lines etc. We hope that will make any newbie's life easier. Just in case you don't want to COLIQ just to see how that new screen looks like, here is screenshot ;) 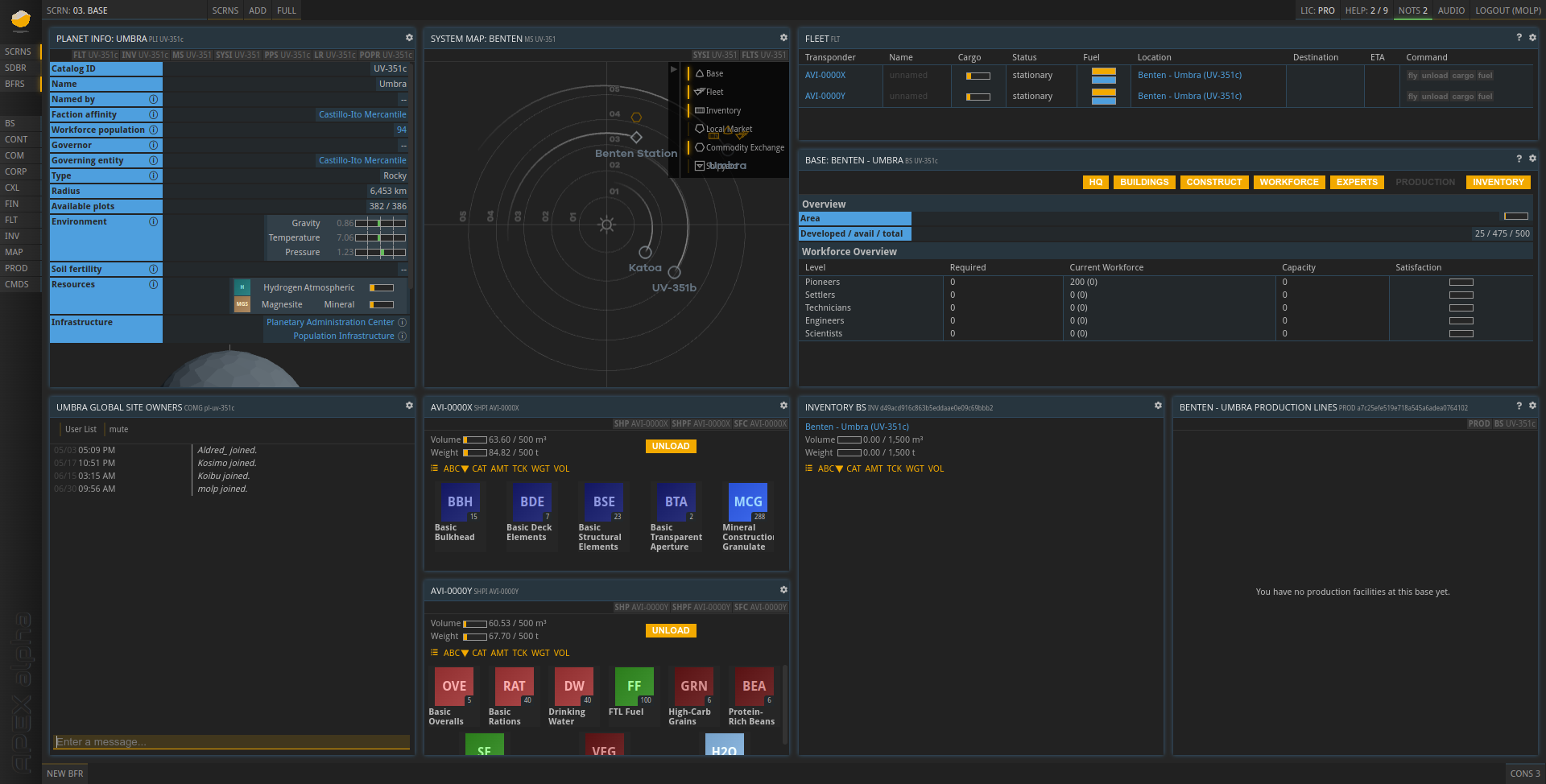 Last week I got started on implementing ship upgrades! With this new feature, you won't have to build entirely new (and therefore expensive) ships on shipyards and can also upgrade your existing ones. The way this will work is you'll select 2 blueprints (one "origin" and one "target" of the upgrade) when creating a shipyard project. The material bill will be calculated from the "difference" between blueprints, i.e. those materials that are part of the target and weren't part of the origin.

This way you'll be able to incrementally upgrade your ship's individual parts in as many upgrade steps as you like. By the way, when we release this feature, you'll also find a new automatically created starter ship blueprint in your blueprint collection. So yes, you will also be able to upgrade your starter ships this way too!

If you weren't aware, last week was Asteroid Day on Thursday. The Prosperous Universe team always likes to participate by commissioning a brand-new artwork from the wonderfully talented Mac Rebisz, you can find the post here. This year's piece depicts a ship that's docked to an asteroid for mining expeditions. We hope you guys enjoy it!

We are doing the final round of Name THAT Planet, so if you haven't already voted, make sure you vote for your favorite name for KI-446b. This poll will close sometime this week. Best of luck!