This week the team goes in depth with post-Populous tweaks, blueprints for spaceships, and thanking the community.

As I mentioned briefly on last week's live stream, I've been compiling a list of Populous-related balancing changes and tweaks. In terms of the math behind it, we'll increase the influence of unemployment on a workforce tier's happiness. This mechanism was always meant to put a stop to a single tier growing forever and increasing a planet's overall needs unnecessarily. It didn't do this fast enough from our observations. Of course this was exacerbated by planets already having hundreds of thousands of pioneers when we released the feature, so a new universe will someday have different dynamics in any case. Speaking of newly settled on planets, to help those get started bases will generate more safety and health on their own in the future.

The next topic is population shifts from lower to higher tiers. Level-up rates are on the low side currently and high-end educational infrastructure (which could be used to boost those rates) is too expensive. Currently level-up rates are based on the growth of lower workforce tiers. In the future, they will be based on their total size, so you won't have to grow lower tiers indefinitely, but just back to a point where they will start leveling up naturally. In addition to that, building and upkeep costs of all infrastructure will be tuned down quite a bit.

Finally, we'll also implement a few clarity improvements, such as displaying the amount of pioneers spawned from new bases in the population report or an infrastructure's average upkeep fulfillment during the last cycle. And of course the government programs I mentioned previously are still on our table as well. With ship building on the way, we're not sure if those changes will make it into the next update, but certainly one of the next few.

I spent most of the time last week working on the new blueprint editor that will be used in ship building. Here is a quick comparison between the work-in-progress from last week.. 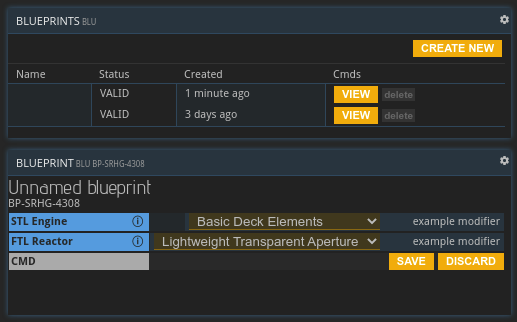 Obviously a lot of things have changed, so here is what is going on. The 'layout' section of the BLU command consists of a list of different ship component types (like engine, reactor, ..) their options and modifiers. Some components can be customized, indicated by the drop down menus, while others cannot be directly changed but rather depend on the selection of other component options.

For example: the amount of structural elements of the ship will depend on the size and amount of the selected options. In the example above it rises from 56 SSC to 131 after changing the options for the cargo bay and the hull plate type.

Every selection comes with certain modifiers that changes the ship's properties. These can be as simple as the size of the cargo capacity and more complex when it comes to shielding against certain damage types or engine performance.

The last section contains a list of all materials that are necessary to build a ship in the specified configuration.

I will try to tackle the performance model next week!

I wanted to thank everyone that participated in our Live Stream last week. I think it went really well and another big shoutout to Iridium for joining us! Don't worry if you weren't able to make it, the video can be found here. I will also be planning some more Live Streams in the future so just keep your eyes peeled for social media posts and the like. I am also going to try my hand at video editing and make short clips of the Live Stream for social media posts.

I was also able to finally finish the Economics HVCO that will cater to players that are more interested in the economics side of the game. If you have any comments, you can leave them on the document or send me a message on Discord. Thanks again to all the players that helped to provide specific examples inside the game.