The Expanse update finally has a release day, and it's less than a week away: Thursday, December 12th! Read what we've been up to this week to get it ready.

Usually, this wouldn't be devlog material, but this time it somehow is: I had an almost perfectly normal work-week!

I spend some time on customer work, helped with an AirlineSim release on Friday and spend the rest of my time working on our analytics system. Technically, said system is already operational. But it's actually replacing an existing system, so my work right now revolves around migrating both our games to use the new system while also moving as much of the existing data we have into the new format as possible. My somewhat humble goal is to have all of this wrapped up before the holidays so we can actually start using all the new features it offers once we're back in the office next year.

I also had the pleasure this week to welcome Frank to the team. You might remember that we've been looking for a front-end dev for a while and Frank is the one we found for the position. He'll be freelancing for us for the remainder of 2020 before we switch into full gear with the funding we'll hopefully receive starting January! I am sure you'll learn more about Frank's work soon!

The end of the year is nearing fast! We really want to ship the Expanse release before the Holidays so we decided that the corporation dividend feature I described last week is going to be the last feature that will make it into the release. There is a bunch of other things that won't make it, most of it smaller changes that can easily be moved into a maintenance update and released early next year. One larger feature remains unimplemented and might get its own release within the next months: A few devlogs ago I talked about that voting is only one way to influence the outcome of the election of a governor. We want to implement a system where anyone can fulfill tasks for the Exodus Council in order to boost a certain candidate. Maybe it's not that bad that this got delayed, that way we can thoroughly test the voting and see if the players like and use it. More on that next year!

To close my part of the devlog, I have a screenshot from the new corporation finances tile for you: 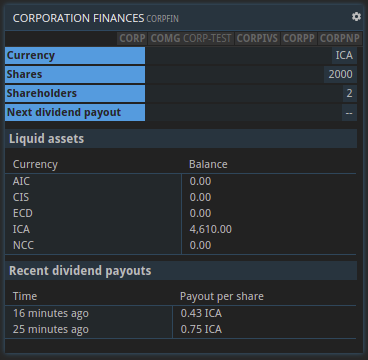 It shows the liquid assets of your corporation, when the next dividend payout will happen, and the last few dividend payouts. Eventually we want the corporation finances to be similar to the ones the companies have but we ran out of time for this release and decided to implement only the part that is relevant for the collection and distribution of production and local market fees. You can expect some improvements in this area in the future!

The Expanse update draws closer, and I've been getting some things ready for its release on Thursday. The date will be officially announced on all our channels as soon as its dedicated update page is ready. I commissioned the new artwork for it a while ago and I'm working on some description texts of the new features.

We got to test the latest version in the staging environment to help Michi find and get rid of some last-minute bugs. As usual, I will keep messing around with the new features and get the hang of them before the update drops so I can update the wiki in time. I already started editing it (locally), chipping away at a pile of smaller updates that I wrote down over the past few months instead of immediately integrating them.

And of course, I have been preparing my impending departure from simulogics. This includes spreading the word about our job ad and starting to write how-tos on all kinds of job-related tasks I've had in the past in order to make it easier for my successor. Not all that exciting, I know, but next week will be a lot more interesting thanks to the Expanse release!