This week, Michi has finished designing the rules around the governor system. We are also now officially looking for a PR & Community Manager to succeed Julian in 2020!

As announced last week, I have recently terminated my work contract at simuloigcs. As a result, I spent a lot of my time this week wrapping up old tasks, checking back with things I started long ago, and generally cleaning up my Trello board to make sure that, a) I don't leave any loose ends only I can really take care of and b) my successor has the easiest start into their job possible. Speaking of which, the job ad for simulogics' next PR & Community Manager is now live on the website! (Remote, half to full time, small & amazing team, browser-based simulation games. Give it a shot!)

I finished the local rules this week. Besides some technical details the last missing piece was a limitation on how often the rules can be changed by a governor. We really don't want the governor to be able to spam the inhabitants of a planet with lots of rule changes, so we set a hard limit of 5 changes per term. This is generous enough to allow changes during the term yet restrictive enough. The amount of updates left is displayed in the local rules screen: 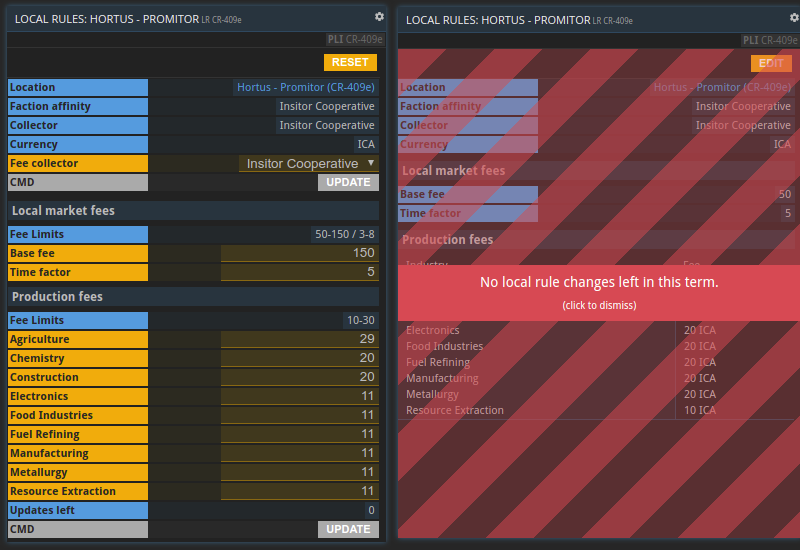 We always said that we want to have a mechanism to spend the money a corporation makes with collecting fees once we release the Expanse update. That mechanism will be a corporation dividend. To keep it simple and to be able to release as soon as possible, all currency collected will be distributed to all shareholders every accounting period (e.g. week). I started to work on that this week, but wasn't able to finish the feature. The corporations will get finance screens similar to the ones that are available to companies, but we will start small and only include a liquid assets screen. Below you'll see the liquid assets hacked into the general corporation information screen, but eventually that will move into its own tile. I just included it to be able to show a screenshot ;) More on that topic next week! 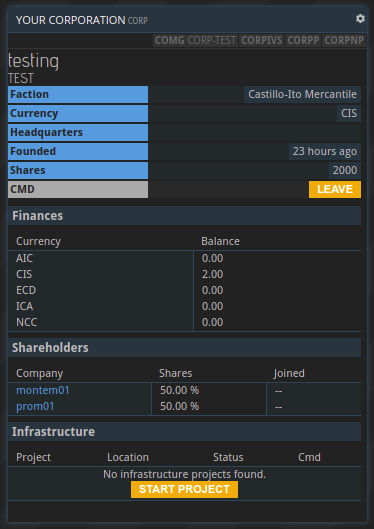