This week, Julian has sadly announced that he will be leaving the company within the next few months. But the show must go on: Martin has been checking off administrative tasks left and right and integrated some basic analytics. Michi meanwhile has been chipping away at the upcoming governor feature and its exact rules.

I'm back from a month of sick leave, and I've had a lot to catch up with. I don't know if you heard; I was hospitalized with meningitis last month and I'm still on my way back to my old self. Sadly, I won't be back for long as I'm going to leave simulogics soon. I'm not sure how many people really care about the details, but I do want to give an explanation to the small, amazing Prosperous Universe community I've been a part of for the past year and a half.

I joined the team in February of 2018 as an enthusiastic Prosperous Universe fan and I'll be leaving it as one. I couldn't wish for a better team, game, community, or working conditions. However, being afflicted with a life-threatening disease really makes you ponder your life choices. I realized more urgently than ever before that I need to chase my dream of building up my own game studio, and that I can't put that off any longer. I was already working on my own hobby project when I started at simulogics, and I really want to give it a go professionally. Statistically, I'm very likely to fail, but I wouldn't forgive myself not having tried.

On the bright side, I will of course stick around as a player and also help out simulogics in some capacities. For instance, I will have a hand in future livestreams, compose the Secret Soundtrack, and stay the face of the video tutorials (which will be updated and extended in the way you've come to know and love). And of course, I won't be leaving immediately; I'll stick around until at least the end of this year. Afterwards, we're going to need someone to replace me; I'll post the job ad soon, feel free to hit me up (julian.colbus@simulogics.net) with your applications.

One last thing: Do not take me leaving as a bad sign for Prosperous Universe or simulogics. Martin and Michi have always been the cornerstone of the game's creation, both in theory and practice. Given the future additional funding and the new positions it brings, I am confident that development of the game will considerably ramp up both in speed and quality in 2020. Plus, Martin has planned for a massive marketing budget -- which used to be zero up until now -- which will enable the game to reach a much wider audience than before. Prosperous Universe has never had a brighter future, and I can't wait to see it.

Anyway, I hope that there is no ill will. I'll make a proper goodbye post when the time comes, but I thought I'd let you guys know what's up rather sooner than later.

The past few weeks have been quite a new experience for me. Rarely before in my life did I have to take care of so many non-development things with such a tremendous impact on the future of the company. Julian broke the sad news to us that he will be leaving simulogics to pursue his own project. We got super lucky in finding a candidate for our open frontend developer/designer position who might actually be able to start in December already. I made the deadline for our funding application but had (and still have) to deal with new, previously unknown conditions to qualify. Since the funding was supposed to start rolling in in December, this all turned out to be quite the rollercoaster and the train is not back in the station just yet.

Besides all the above, having the whole family go through various maladies and spending an above average amount of time on customer work, I still managed to finally get the basic foundation of our new analytics system wrapped up (which I last talked about in development log #206). I hope to get it deployed and operational over the coming days so we can start integrating it into our various systems and games over the course of December.

I released the announced maintenance release this week. It seems I rushed it a bit though. Its original release date was Thursday, but I got ill and delayed it to Friday. Well, we all know that Friday is a bad day for releases. ;) Players immediately noticed that placing FX orders was broken (it is fixed now) and the changes to the STL fuel weight and volume had unintended consequences for the fuel usage. Flights now require a substantial amount of STL fuel more than before the change. I will fix that as soon as possible. If you know of any players whose ships got stranded because of this please let us know, so we can help out!

Besides the release I worked on the administration center again. Quite a few players asked if there will be any rules to changing the rules (e.g. fees, etc.) of a planet once a player becomes governor. The answer is: it depends on the location. In the factions' core worlds (essentially the starting planets) the production and local market fees are almost fixed, allowing only small deviations from the standard values. This is of course to protect the new players. In all other faction worlds of faction space the deviation from the standard value can be larger, but is still limited. Only in non-faction space, the governors are free to set the fee to (almost) any value. Setting them to zero is certainly fine, but we will probably introduce some sensible upper limit. 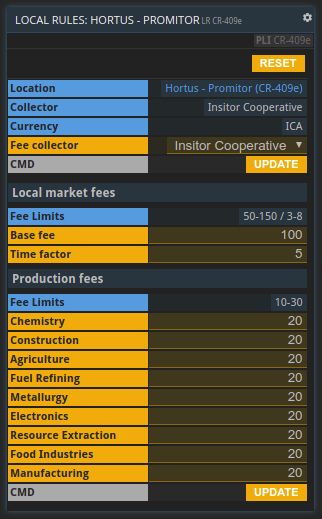 We also think about limiting the amount of changes a governor can make in a term. Right now every change to the rules will trigger a notification that every player with a base on that planet receives and we don't want that to spam the players.