Michi talks contract rarity and Nick is happy to show off the new tutorial remakes.

I was able to finally finish implementing all ten faction contract types that we'll include in the first iteration of the feature. The contract types are grouped into three groups: common, uncommon and rare. Usually you'll get common contracts, but from time to time an uncommon or even rare contract will pop up. Usually the rarer the contract type, the higher the reward in terms of money, materials and faction reputation will be.

The following is one of the rare contract types, and possibly the longest I've ever seen ;) 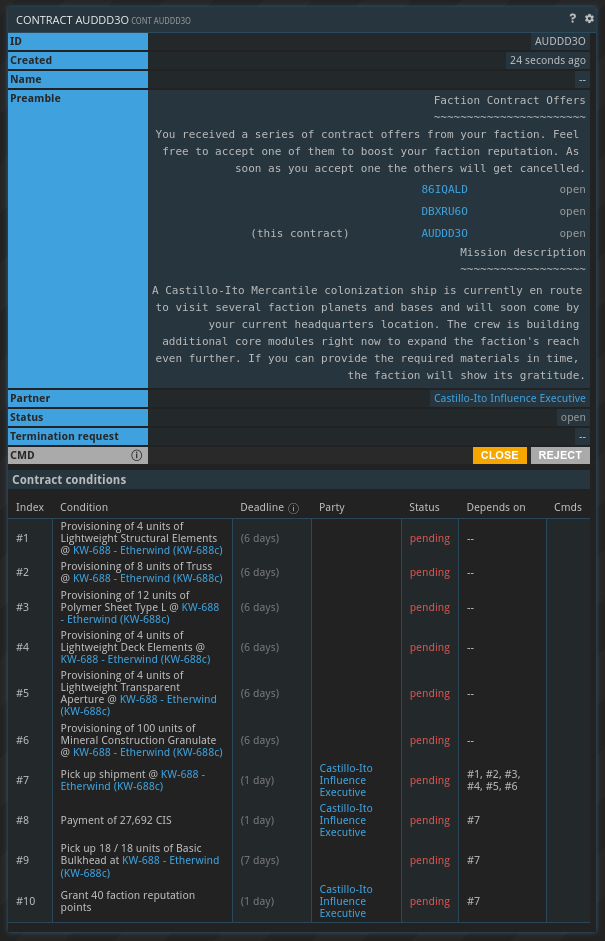 In order to test the feature in real-world conditions, we'll release what we have so far to our test server in order to see if everything works as intended.

The feature itself isn't complete just yet, there are a few things left to implement and polish. I'll be looking into that this week.

I am happy to announce that the first part of the new tutorial videos are now published on YouTube. These videos include detailing the most crucial elements of the game for new players. You can check them out here. A huge shoutout and thanks to SeaPear for all his hard work!

Also, don't forget to suggest a name for QQ-001a, which was voted on to recieve a formal name from the community. Once we have all our suggestions, we will go ahead and hold a final vote for the new name. Best of luck to everyone who has a horse in the race!