Learn about faction reputation, and don't forget to vote on your favorite planet!

Due to a public holiday, a day off, and a mild fever my development time last week was limited. Nonetheless, I wanted to show you the current faction contract type I have been working on, the headquarters upgrade contract: 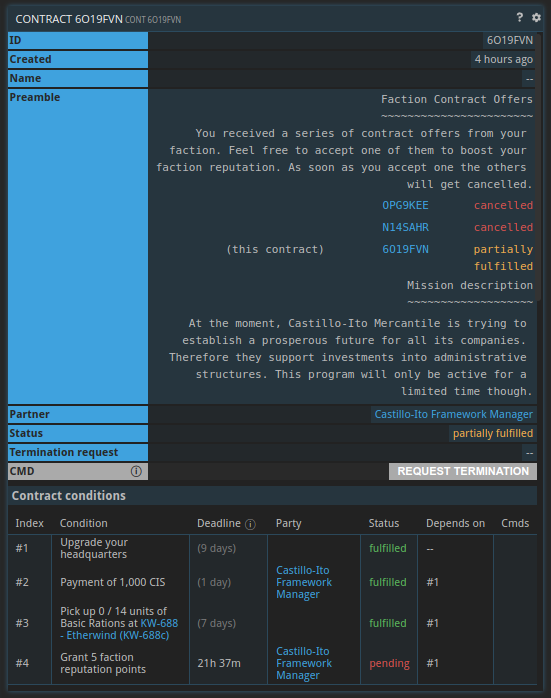 So basically the faction will pay a reward for upgrading your company's HQ. While implementing this contract type, I also looked into a new concept that will make it into all the faction contracts eventually. Fulfilling contracts for the faction will increase one's standing with the faction. The last condition in the example above is a new type of condition that automatically grants a certain amount of faction reputation points on the fulfillment of a contract, or in case it breaches, removes a certain amount of points.

For now, the sole purpose of the faction reputation is to determine the volume and amount of rewards for faction contracts. We might make use of the reputation values in future features though.

The new tutorial videos are almost done! A big shoutout to SeaPear for all his great work with the series. Everyone is happy with how they have turned out and I can't wait to get them uploaded. I think this will be a really great help to new players and those that want to see what Prosperous Universe is all about before taking the plunge. I will be uploading the first part of the series that covers all of new player basics and then it will be followed by the more advanced gameplay mechanics videos.