The team is back and ready to go with Michi talking faction contracts and Nick finalizing website changes.

First of all, sorry for the extended downtime this morning. We had only planned a small maintenance downtime to introduce a patch for a minor bug when we saw that a larger update of our cluster was due. Unfortunately, the update didn't go as smooth as we had hoped. The game is back, that is most important. A few secondary systems are still not working, so we might require another restart today or tomorrow.

This week I continued working on the faction contracts where I left off before I went on parental leave. To reiterate: The faction contracts will be contracts that faction representatives (NPCs) send players (new and old, FREE and PRO licenses). Usually they will be received in batches of three, where it is possible to choose one. Faction contracts are randomized both in terms of what they will entail and also their rewards. In order to create a proof of concept, I am currently working on an exploration contract: 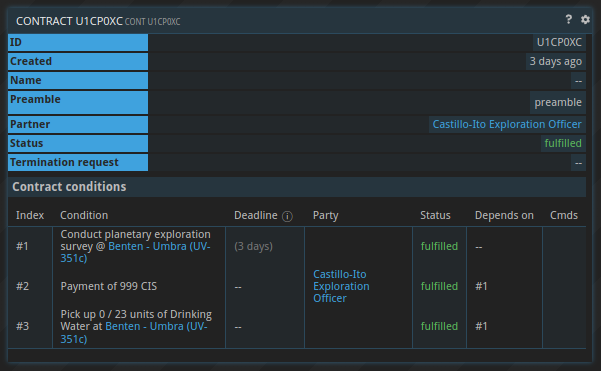 As you can see in the screenshot above, an exploration contract will require the player to send a ship to a randomly selected planet or system a few jumps from their HQ. Then they'll have to perform the exploration survey by fulfilling the corresponding condition. Don't worry, this type of contract is especially meant for new players, so you won't need to have special equipment to do the survey. Just being present with a ship is enough. The contract is rewarded with money and materials and the amount depends on the distance of the planet to survey and the deadline given. Rewards can consist of multiple commodities.

While this might look like "almost done" there is still plenty of work to be done in the generator that provides the random location, reward values, a preamble text and so on.

I returned from vacation last week and was able to settle back into the normal routine of getting the word out about Prosperous Universe! You may have noticed a few changes on the website. I have been talking about these changes for awhile and now they are finally live. The support tier packs now have their own button next to "PLAY FREE" and the PRO License information and pricing has moved to the navigation bar. I received some feedback that some players couldn't find the support tier information since the changes have been made. I am now considering what to do about that, but I think it makes sense to add something about support tiers on the PRO License page, just in case someone goes there looking for that information.

I am also happy to announce that we will be sponsoring a YouTuber that will step up a dedicated channel for Prosperous Universe and use it for streams, informational videos, and other content about the game. I won't reveal who that individual is right away since we just settled on an agreement and not much has been done at the moment, but expect to see regular PrUn content on YouTube in the near future!