This week has been a bit of a mixed bag, both in regard to what I worked on and how successful I was. There is a secret project (which I can't talk about just yet, hence secret ;)) going on and my first prototype for it was a failure. I put a lot of effort in, but in the end we had to scrap it. At least I learned a lot while creating the prototype and have a solid idea for the next one!

The Faction Expansion Challenge is still in the registration phase, and I am happy to see that we have six registrations so far! Some even created their own flags for it, very cool! We will keep the registration phase running for another week and then start the development phase! So, if you are working on a registration or thinking about joining forces with other participants, now is the time to get everything sorted out!

Between the prototype and the challenge, I also found some time to work on the maps and the mobile UI. Here is a work in progress screenshot of the highlights in the universe map: 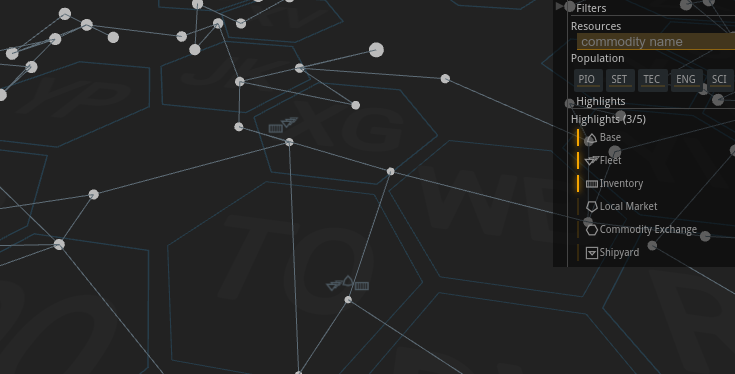 As you can see, we are going for the same radial icon controls as I showed for the system maps a couple of weeks ago. So far, the icons for the data that originate from the player company (bases, fleet, inventories) are working. The next step is to be able to show icons for public infrastructure like commodity exchanges and local markets.

We further discussed faction contracts last week. While the general concept and content are pretty much set now, I'm now working on how they will look and be presented to the player, particularly the bundle of contracts you will choose from each time you get a faction contract offer. One important factor in all this is to keep the future of customizable contracts between two human players in mind. Basically a faction contract will be a "choose one of these 3 options" contract bundle, send to a player by an NPC actor.

In the future, this same model is something you could use to e.g. send multiple contract alternatives to a partner and have them pick one. At the same time, there could of course also be a "choose all or none" toggle that will enable you to build and send a bundle of multiple contracts (potentially all kinds of different types) that only really make sense as a whole and have your partner sign all of them at once.

Last week was mostly devoted to influencers again, and I'm happy to report that we should have another new YouTube video coming out this week. I'll let you guys know in next week's Devlog which channel ran an ad for us. I also was able to secure a few more content creators for this month and next, which is great because we seen the biggest influx of new players come from YouTube.

I also sent out a few emails, and you should have received at least one! One was about the Faction Expansion Challenge where we also offered a voucher for 10% off PRO if you are still a Trial license player. So far we have seen quite a few people take advantage of the offer, which is also nice to see. The other email was about the mobile version if you have test server access. Hopefully we will have more info on that shortly :)