With Early Access haven gone even smoother than expected, Michi breaks down the birth of the universe with plenty of graphs and statistics!

We made it! It's alive! Starting into Early Access with a brand-new universe and no major technical issues fills me with joy :). Instead of telling you how nerve-wrecking last Tuesday and Wednesday have been for me, I'd rather show you some graphs from the early universe!

Let's start with the starting profiles chosen by the players: 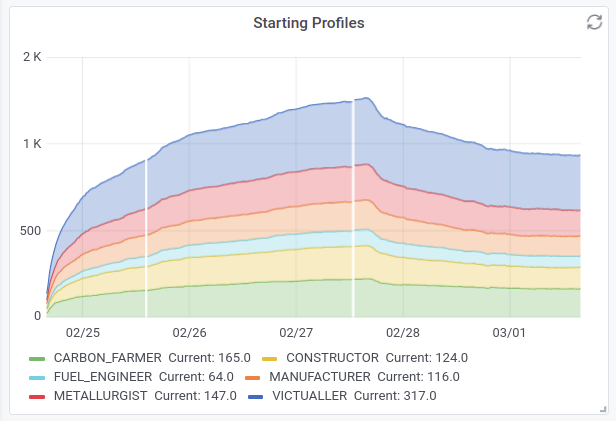 Over the course of the first three days around 1.5k companies have been created. We sent out a newsletter to everyone that ever created a Prosperous Universe account which explains the sharp rise in the beginning. Due to Nick's marketing work we have been covered by a lot of MMO websites which sent more new players in our direction. This chart only counts companies who have been active in the last 72 hours, so we see a drop starting on day three. Victualler is the favorite starting package and this is understandable as food production is most important in the beginning of a universe

These graphs show the starting package selection split by faction. The overall shape of the curves are the same, but depending on the faction, different starting packages are more popular. As expected, Insitor has a strong focus on food production, while NEO Charter focuses more on metallurgy. Interestingly, there is no visible trend for the new faction Antares Initiative! 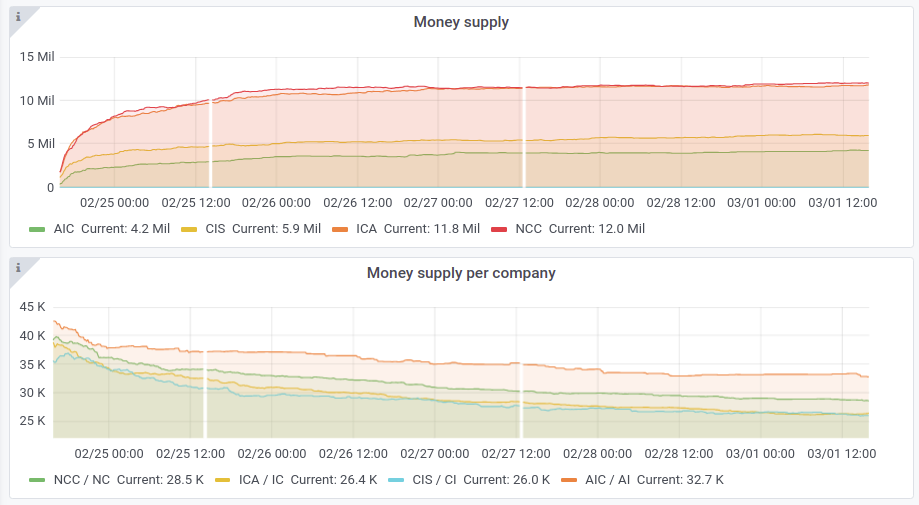 The money supply keeps track of the total amount of money in the universe. As every new player brings in around 40k, it is expected to rise sharply in the beginning. Even though new players keep on joining, the money supply flattened after two days, and this has to do with the market makers. We saw a strong market rush to buy prefabs for new production buildings. The money the MMs take for these prefabs is out of circulation.

The lower graph shows the money supply per (active) company and reflects that: There are more players, but some money is taken out of the game by the MMs, so the statistically available money per company drops. In the early hours, it looked like this could become a major liquidity problem, but the curve is flattening out now. In the meantime, production has ramped up and some of the products have been sold to the MMs, and thus fresh money has entered circulation. However, the MMs took more money out of the system though. The next graph shows the total balance of all market makers:

While this may look worrisome it is kind of expected, we saw the same behavior in the beginning of the last universe.

Last week was a short one for me, but I still managed to keep an eye on the new-universe launch and all the feedback. Lots of things taking some getting used to and as always lots of notes on improvements for the future, but most of all: exciting times! It'll be super interesting to watch where this one will be going.

Another thing that became clear, again, from starting over: We should really improve that new-player experience! This is exactly what we're planning to do in the near future, so I'm currently looking into all kinds of improvements to the onboarding process, including "real" tutorials that teach the player how to handle APEX and how the gameplay basics work.

We made it! Early Access officially launched last week, so most of my time was spent making announcements, posting on various parts of the web, and of course contacting the press. I was thrilled that we were able to get several articles posted about us like the article from TheGamer, which really helps with getting Prosperous Universe's name out there and with reputation building.

Aside from Early Access stuff, I also worked on the remaining content for the new Roadmap, which will hopefully be out this week. This roadmap was designed to be updated regularly and help showcase what the team is working on at any given time.

Quite obviously, my week was dominated by the Early Access release and the general overhaul of our backend systems that came with it. It all went surprisingly smooth. Sure, there were a few teething issues and once the new systems were in place we realized a few things that went missing and had to be quickly reimplemented over the remainder of the week. But all in all, this could have literally ended in a full-blown desaster and it didn't, so I am quite happy!

Work on the backend will likely continue over the coming weeks. Some of our internal admin UIs are still missing and the customer-facing account management pages are also missing a few features that we deemed low-priority for the initial release (who would want to delete their Prosperous Universe account anyway, right?). But my focus will eventually shift back to actual feature development and planning for the months (and years) to come.