Ignition is now live! The team talks about tasks leading up to the launch as well as for plans in 2021.

Last week was all about getting ready for the Ignition release. One of the major last features of the release that was still missing was the ship flight damage. Starting with the Ignition release, all ships, including the legacy ships that have not been built at a shipyard, will suffer attrition damage when flying. There are several types of damage a ship can receive:

The total amount of damage a ship receives on a flight can be reduced by the type of the hull, as well as specialized shield components. A damaged ship will start to fly slower as soon as its condition is below 80%. The current condition of the ship as well as the materials required to repair it can be seen in the SHP command: 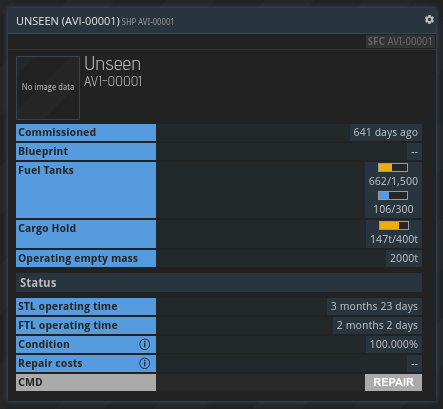 To repair the ship, simply head to one of your bases where the necessary materials are stored and hit repair.

Just moments before I started to write this devlog entry we released the Ignition update. Check this forum topic for more details!

As Michi already mentioned above, last week was pretty much all about ship damage and finalizing things for the release (including the new shipbuilding page in our handbook). Concerning ship damage specifically, we've been tweaking the numbers extensively already, but if something doesn't feel quite right yet, let us know. As always, we'll continue to closely observe how things play out in the "real world"!

In the last week before my end-of-the-year vacation, I'll prepare a few game design thoughts on potential additions in an upcoming maintenance patch, such as the ability to expand warehouse capacities or how to integrate a variety of quality-of-life features into the game.

Another week of press releases/emails for me, but I won't talk about that again :) We had some trouble with YouTube Ads since they restricted our account after just a few hours of running our ad. It seems that we don't have the best luck when starting out on a new platform. If we don't get marked for "dating" then it's something else bizarre. But the restriction didn't last long and we were able to start getting results a few days later. I'm hopeful that we can get some use out of YouTube over the next few months.

I know I've been saying this for awhile, but I'm like 99% sure it's happening this time. We are going to get a sponsored video up on YouTube this week! It should be out on Wednesday and I will post it in Discord/social media channels for all to see. I'm pretty excited and anxious to see how it performs. Fingers crossed that all goes as planned!

Also, sorry for the delay of our Live Stream for Ignition. We had planned to do something for the launch today but it didn't quite work out with scheduling, so we will plan something in the coming weeks. Stay tuned on Discord/social media channels for more information.

My backend work continued last week and it will do so well into 2021. We have officially pushed the Early Access release to "NET January" because I won't be able to finish the backend system overhaul in time for the holidays. On the plus-side, this leaves a bit of breathing room for us to prepare the release and also to spend some time with the team to discuss our short-, mid- and long-term plans for the game in more detail. The plan is to release a revised roadmap with the EA launch and if it wasn't for Corona, we'd probably have a real-world team meeting around this time to plot and scheme together. Instead, we will do the same thing in a series of virtual meetings. Not quite as productive and satisfying as the "physical version", but it'll lead to the desired results eventually.

In more technical news, I have more or less wrapped up most of the cross-product and AirlineSim-related changes to the backend. Now I am moving on to the parts specific to Prosperous Universe, which will finally (!) include the first visible bits of Manoj's work. He's been creating designs for our website, account management system, desktop client and mobile UI for months now, with most of his output stuck on a mile-high pile of to-do items for the developers. Over the coming weeks, this is going to finally change, and the account management system (aka "hub") will be the first component to receive a visual overhaul.