Michi outlines how to take your blueprints to the shipyard and assemble your brand new spaceship. Fabian talks about a future company headquarters feature.

In last week's devlog I described how a blueprint defines a ship's layout, performance parameters and capabilities. This week I want to show how to actually build a ship.

After the blueprint has been finished it is time to find a shipyard. Shipyards are planetary projects and we will seed three initial shipyards when the release goes live. As usual planetary projects can be found in the PLI command. Clicking on the infrastructure link will open a new SHY command that'll look like this: 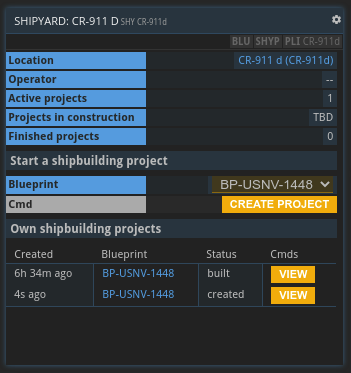 The top section contains of public information about the shipyard itself, like some statistics about produced ships. The middle and lower sections are private. Selecting a blueprint and hitting "create project" will create a new shipbuilding project. Doing so will lock the blueprint, meaning that from this point on it cannot be changed or deleted ever again. All own shipbuilding projects at this shipyard are listed in the last section. A freshly created project will have the status created.

Clicking on a project leads to a new command called SYHP that either shows a list of all shipyard project, or in this case details of a specific project: 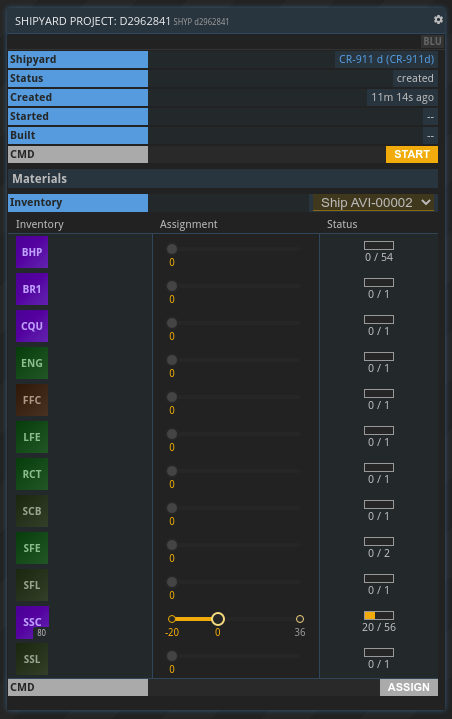 The command has the project's status and allows to transfer building materials from a storage located at the shipyard. At first glance it might look like a contribution system we have for example at the CoGC, but in this case it is also possible to transfer the building materials back into a storage if they are needed in another project more urgently.

Once all building materials have been assigned the project can be started. Depending on the size of the ship it'll take a while to complete.

Apart from continuing to chip away at the big "What's next?" question, I'm also working on a couple more concrete topics these days. One is "company headquarters", which basically started as a thematic hook for the idea of "entity permits" (soft limits to how many bases and ships a player can own) I talked about on a previous devlog. But instead of just making it an upgradable building (e.g. a version of the core module you can upgrade to raise your entity limits), there are some extensions to the idea that feel quite natural, such the positioning of your HQ in the universe having an impact (maybe based on the faction space it's located in), or being able to upgrade several "sub-modules" of your HQ to deliberately improve specific aspects (as an opportunity for player specialization). This will make it a bit of a bigger topic of course, but we think it makes a lot of sense in the long term.

Other than that, I started working on the ship-building part of the handbook, which is a clear sign that we're getting closer and closer to release. Looking forward to the first player-built ships taking off! :)

Last week I was able to have a phone call with a Facebook Ads Expert, which was a big help not only for tips on how to effectively run ads but also so I can finally tell someone that our ads keep getting labeled as "dating website" every time I set them up. I can't think of a game that could be further away from dating than PrUn haha. The expert offered some good tips like broadening the audience and selecting fewer interests, so we will see if the ads improve.

I also wrote the content for Ignition for both the release page and the newsletter, which you should be receiving this week. Keep your eyes open for some new announcements coming soon!