I deployed the Populous code base on our test server this week. As usual some problems only emerged when testing on an actual cluster and not just a local test environment. Naturally I spent some time fixing the issues. I then later invited the other team members to give it a try and test various things. So far we haven’t found any major issues, but we will keep testing of course.

Some players with access to the test server already noticed that the new content is online and talked about that in our Discord. That is of course totally fine, but we want to give all players with access to the test server a chance to have a sneak peek, so we will send out some invitations to it within the next couple of days.

Besides getting Populous up and running for the first time I also worked on the last missing feature of this release. You might recall from the last devlogs that population infrastructure projects are upgradable to provide means to support a growing population. The upkeep linearly scales with the infrastructure level. But what if the population shrank over the course of some months and the upkeep is too high for the remaining players? What if the local government wants to focus on certain population needs?

To solve these issues we allow governors to select the effective (or current) infrastructure level for each infrastructure building. I divided the local rules panel into two tabs, “Fees” contains the existing Local Rules and “Population” the infrastructure controls: 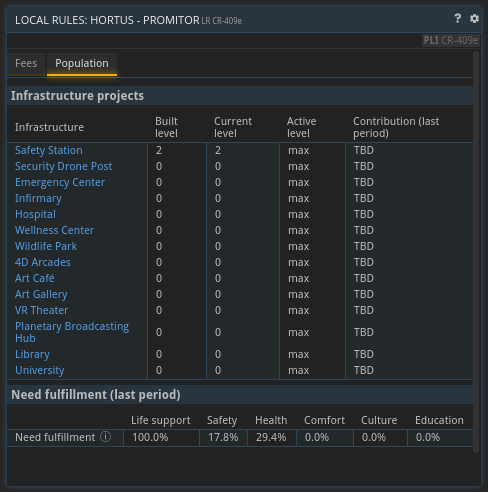 Unfortunately I wasn’t able to finish the controls this week, so I’ll get into the details next week!

I took a little break from the world of ship-building spreadsheets last week and instead updated the handbook for all things Populous. Since the update not only adds the totally new mechanisms of population growth and satisfaction, but also fundamentally changes the way workers are assigned to bases, there are many parts of the game that will be affected and documentation had to be updated. Also there will be a whole new page in the tutorial section dedicated to planetary populations, their needs and how workers are distributed among players. We’re planning to release the handbook updates soon, so you can already read up on what’s coming before the update hits!

The other major topic I started working on was the universe map. Since there will be a reset at some point and we’ll generate a new universe with it, we need to think about what we want to change and how. Of course this needs to take into account all the changes we’re making with the upcoming Populous release and the future ship building features. On top of that, one fundamental change we’ve been wanting to make for a while is pulling commodity exchanges away from the hub worlds to make them less “overpowered”, and instead establish exchange space stations. This has quite a few implications, such as players having to engage in ship flight from the very start, which affects the early-game experience and therefore our current and future onboarding efforts as well.

While I don’t have any thing “new” to talk about this week, I was able to finish and implement a lot of things related to Facebook ads. The High Value Content Offer (HVCO) is now up on the website so if you were curious about what I came up with then go check it out here. If you have any feedback for me, please message me on Discord or email me! I think it turned out pretty well, and I had a lot of fun researching the topic. I talked to another player about doing an economics version of the HVCO and I will be starting that soon because I can also see many players be attracted due to the economics aspect vs. the sci-fi aspect if presented in the right way.

The ads on Facebook are going to be tested in four different categories relating to economics, browser/strategy/simulation gaming, space exploration, and desk-job occupations. I’ve done some mixing and matching with the categories to target different kinds of audiences and we will see which ones perform the best. I also used some static images, gifs, and a short video to see if one type of content format is better for our target group. I’m excited to get these ads out and see how they can be refined and improved to give our community a bit of a boost. 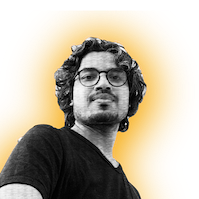 I worked on several iterations of the mobile user interactions to have better command controls and standardized menu options. I also worked on the material transfer option which needed a quicker and more streamlined user experience for single transactions when navigating within inventories. While finishing up my workflow, I began the design for the generic layout (or wireframes) for the Prosperous Universe website redesign. I also sketched an initial concept for the system map and planetary maps. All in all, it was an eventful week.