This week Michi teaches us how workers are distributed among the bases and how worker reserve pools will function. Nick gears up for Asteroid Day which comes at the end of the month!

This week I finished the integration of the planetary population with the local workforce.

Up until now every base had exactly the workforce it required to run the production lines given that there is enough habitation space. If one added a new production building the required workforce would go up and if it is equal or below the capacity the workforces would just be there.

This behavior changes with the Populous release. Every week when a new population report is generated the planetary population is being distributed among all bases of the planet. Whenever a production building is constructed or demolished and when the habitation capacity changes the base silently sends a workforce request to the population. During the distribution of the workforce the requests are evenly spread among the bases, meaning that every base gets a tiny slice of the workforce until its capacity limit is reached or no planetary workforce is left.

Below is a screenshot that shows one of the effects the new system has: 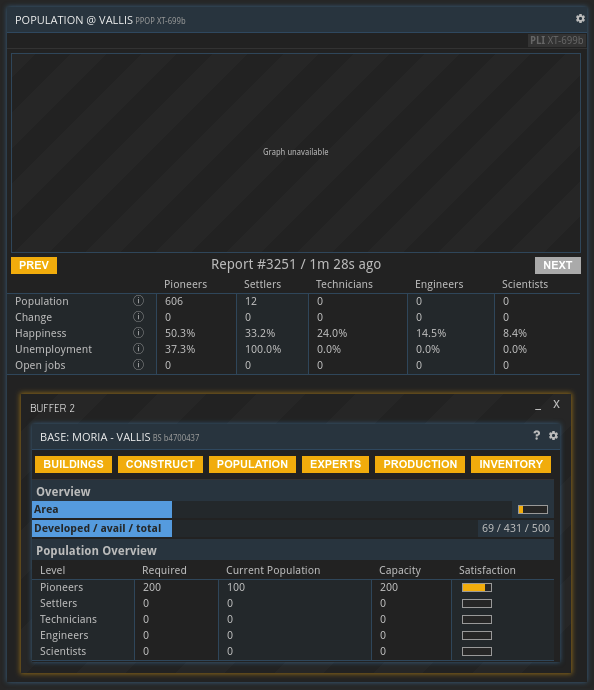 In the back you can see the current population report: Vallis has more than 600 pioneers. The buffer below shows the workforce overview of our base. We have capacity for 200 pioneers, we require 200 pioneers for the production lines but the current population is only 100. How can that be? Just before taking the screenshot I added a new basic material plants that increased the number of required pioneers from 100 to 200. A workforce request is being sent to the planetary population, but not filled immediately because the workforce distribution only happens once a week.

To mitigate this we have another feature planned called “worker reserve pool”. It is a simple pool of workforces that are not distributed as described above, but kept for situations where players build new production buildings. If the pool still has workforces left they are assigned to the base immediately. Ideally the governor of a planet can set the size of the reserve pool, choosing between keeping the unemployment rate low and not frustrating the inhabitants of a planet with low workforce reserves. More on that feature in a later devlog.

I hope you guys were able to see the Release Roadmap I tweeted out this week! I got a lot of positive feedback so thanks to everyone who liked and shared! I am also extremely excited to share with you guys about our Asteroid Day campaign. Not only will we have some amazing new artwork from Mac Rebisz but we are also planning something special, more details to come very soon!

On a completely different marketing topic, I have been doing some ad strategy research and came across the topic of “High Value Content Offer” or HVCO. Basically the strategy is used to warm up your cold leads that come from Google/Facebook that did not specifically search for our game but may be somewhat interested. Instead of immediately asking them to pay or even play our game, we would deliver some quality content that answers their burning questions related to economics, space, etc. This gives them an idea of what they can experience by being a part of our game and community without pressuring them to play.