This week we took a break from the development of the Expanse Release and worked on a maintenance release instead. Besides some long awaited bugfixes we changed how resource extractors work and simplified the user interface for the foreign exchange.

This week I took a break from working on the Expanse Release and focused on getting a maintenance update ready. As usual a lot of issues have piled up in our tracker and we like to bundle them in small maintenance releases so we don't get distracted from out main tasks.

You can find the complete release notes in the forum, but I want to give you an overview here as well.

The probably biggest change game play wise is that we changed the behavior of the three types of resource extractors. Up until now one extraction order would include all the resources of the same kind. For example on Montem an extractor mines limestone and iron ore at the same time. After the release each resource extractor will have a separate recipe for each resource. The reasoning behind this change is, that there are a lot of planets that have an interesting resource, but another resource in great abundance. To be able to extract the interesting resource one has to get rid of the abundant resource as well. Given the limitations on ship capacity this can be an impossible task. 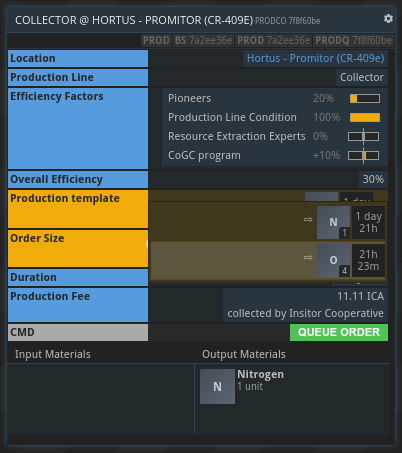 I also increased the market maker buy order for sodium Na. The production of Cl has the byproduct of Na and right now Na piles up since there is only one usage for it. Increasing the MM buy order makes Cl production more interesting and viable.

We received many complaints since the beginning of the game that using the foreign exchange is too confusing. To make it more user friendly I divided the tile up into two tabs, one for buying a currency and one for selling. There are also a few additional fields now, including the FX fees. These have not been on the tile before and thus have been a big source of confusion. Please let us know how you like the new layout and if it is better than the last one.

The update will be released on Thursday November 21st.

Oh, and Martin says hi! He was busy doing the final paper work for our grant application.