This week we finally received some news concerning our grant application and had to meet a tight deadline for the corresponding paper work. Meanwhile the work on the Expanse release continues.

As mentioned in my last devlog I continued to work on the Local Rules implementation. The local rules are a summary of all fees that apply at a certain location like a planet. The general layout hasn't changed from what I showed last week, with one exception: 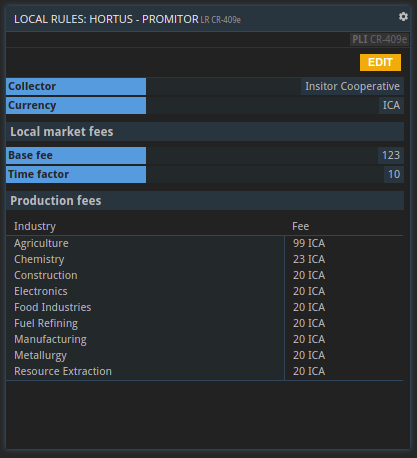 The player that is currently governor of the planet can switch to an edit mode: 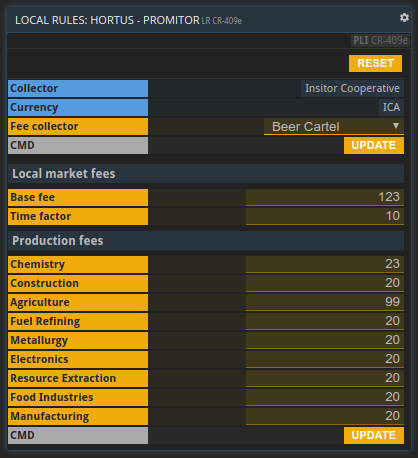 Let's start at the bottom. As expected the UI can now be used to setup new values for the production and local market fees. Production fees can be adjusted per industry to allow a fine granular fee structure. The local market fees consists of a constant base value and a variable time factor that is being multiplied with the visibility duration of the ad.

The upper part allows to select the entity that should receive the fees. In this example I can choose between the faction Insitor Cooperative and Beer Cartel, a corporation. There are some rules what entity can be selected:

If the player is not shareholder of any corporation only the faction option remains.

As you can imagine that little drop down box has a large effect on a lot of components of the game. In fact I am still working on some of the technical implementation details but wanted to show you the user interface anyways.

If you remember, we handed in an application for a grant several months ago. This week we finally received positive feedback: We are invited to hand in all the documents required for phase II of the screening process! Unfortunately, those good news came in with a very tight deadline and we have to hand in all the paperwork by tomorrow. That meant my week was nothing but that: paperwork! I reworked our initial application to include the feedback we received and produced all kinds of documents to confirm that we're honest and creditworthy and generally a good sink for the government's money ;)

Anyway, I got must to all of the required items ready and I'm confident I can hand everything in tomorrow. If everything goes well, that would mean we'd work with a considerably larger budget starting December already, which is also why we picked up the search for a new frontend developer/designer again! So if you know of someone who might be interested or are interested yourself, please don't hesitate to forward the ad or send us an email. Just keep in mind that we can only accept candidates who can be employed in Germany.