After a great livestream on Monday, the team jumped right back in to prepare next week's update dubbed "Prelude", which introduces production fees and building degradation.

I'll keep it short this week, as things have gone back to normal for the first time since our F2P launch. The whole team has finally been back together and there wasn't much new to advertise this week, so I mostly dealt with support e-mails and such.

However, I do hope you enjoyed our livestream on Monday (thanks for 64 viewers and at least as many questions!), which is now available as a VOD on Twitch and YouTube.

I predominantly dealt with game design this week, although not directly.

First and foremost, we came to an agreement with our top candidate for the game systems designer position we advertised! The contract isn't signed yet and we're still waiting for a final confirmation of the starting date. But I'm confident we can wrap up the official documents some time over the next two weeks. Filling this position means a lot to us and the project. For the first time ever, we will have someone work on the game's system design 100% of their time which should help tremendously with shipping the great new features we have planned for 2020 and beyond.

Sadly, our new employee will start no earlier than December, which means we're still pretty much on our own until then. So I spent a few hours this week preparing a "style-guide-by-example" listing various materials, equipment, concepts and systems from science-fiction universes I like. The idea being that once someone else (or even ourselves) starts working on the material tree, they know what kind of style we are trying to go for.

I was able to finish almost all the development issues left for the upcoming 'Prelude' release. 'Prelude' really is just a small feature release that foreshadows what will come in the 'Expanse' release afterwards. It solely exists to reduce the waiting time and the development scope of the 'Expanse' update. Its main features are production fees (see my last devlog) and building degradation.

With building degradation we introduce a new sink to the game. A building is depreciated over the course of 26 weeks, which means that its initial book value (the sum of the values of all input materials) will drop to zero. In accounting the depreciated value will appear under expenses, site depreciation. We show the book value in the buildings list: 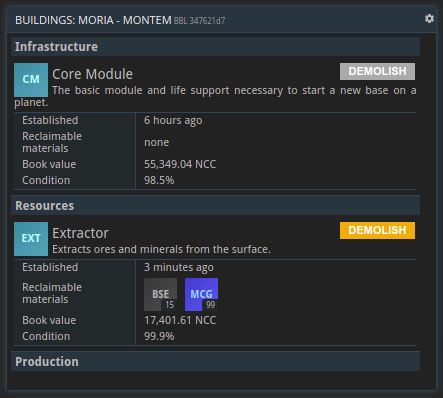 As a production building gets older it degrades and cannot produce as efficiently as before anymore. We refer to that as its 'condition' and it is also shown in the building list. The condition starts at 100% and will go down to 33% over the course of the 26 weeks. The condition directly effects the efficiency of the production line and is shown as an efficiency factor: 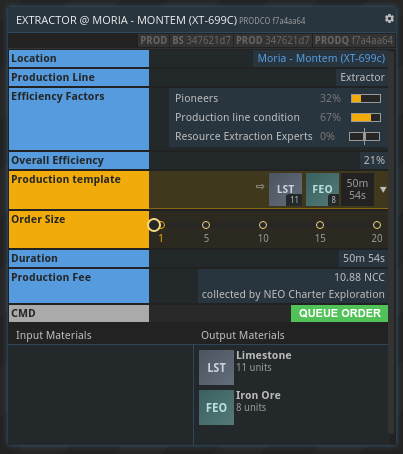 If a production line has multiple buildings in different conditions its overall condition will be the average of all buildings' conditions. That way there is no need to make sure that a certain production order needs to go to a specific production slot, e.g. building. They still are all equal. To increase the production line condition one of the old buildings has to be demolished and a new one has to be built. We might add a repair mechanic later on, but want to keep it simple for now.

We hope that the degradation will have a positive effect for new players since they start their production at 100%, while older players have to deal with degraded buildings.