Free-To-Play is coming in a few weeks, and the team is building up to it by pushing out a series of smaller improvements and loading up the marketing machine once more.

Luckily last week's balancing update was successful and therefore I could focus on the coming bugfix release this week. The bugfix release will fix some issues that have been reported with the local markets and some minor other issues. If you want you can have a sneak peek at its unlisted release notes. If everything goes well I will release it on Monday.

My favorite change in this release is probably that one now gets a notification when a contract partner fulfilled a contract condition. That makes it so much easier to keep track of ongoing contracts, especially the ones where conditions dependant on each other.

One often requested quality of life improvement for PrUn is that the countdown accuracy of the currently running production order should match that of the queued orders. Here is the version before: 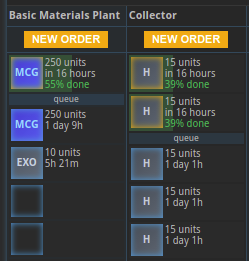 and after the change:

Besides working on that very immediate release I also started to work on the next big feature release with the codename Expanse. Once I finish my draft, Martin and I will decide which features of it are in the scope of the release and which aren't. So right now I cannot really talk about it, but I would love to do so soon. A good occasion for that could be a live stream celebrating our 200th devlog which is only 7 weeks away. That may sound like a lot but given that we started this project almost 4 years ago it seems like no time :) Let us know if you would like that!

Sorry for my absence last week, there wasn't much new to report as I kept sending out invitations to influencers and looking for an artist to work with on our trailer. I finished up both this week, and I honestly have to say I'm somewhat disappointed by the lack of reactions I've gotten so far from YouTubers and streamers. Obviously, they are busy people, and Prosperous Universe isn't the flashiest game to make a video about, but I did expect a little more than one single response and zero videos after literal sending messages out for days. Maybe it's the stigma of PrUn being a browser-based game that makes people wary. On the other hand, my e-mails might just have ended up in some pipelines, and some of them will check out the game eventually.

Apart from that, I finished up the storyboard for our next trailer and went through a whole lot of messages by motion designers who applied for the gig. I will get back to all of them soon, and we are confident there's someone in there for us already, so we don't need any more applications. Thanks to everybody who got in touch!

It's been a slow week, mostly because I've been sick for the past couple of days. However, August is coming, and so is our Free-To-Play release, and I'm ready to get back in the game!