It seems this is a solo devlog this week! With the upcoming free-to-play release drawing closer I want to show you some of the features that have not been implemented so far. The free-to-play release is a rather technical release, so don't expect not much new game play features, but still, there are a few noteworthy things!

We expect more and more players once the F2P release is live. Right now we have a very helpful and decent community of players, but you know, this is the internet so we expect all kinds of bad behavior. Time to get the tools ready to mitigate that ;)

Players can now globally mute other players with the press of a button in the corresponding USR buffer. A new command COMF ("Communication Filter") shows a list of all muted users and allows to unmute them:

When a muted user ads a message to any channel you are in as well it will be shown like below. The message's content is blocked, but can be made visible by clicking on it. 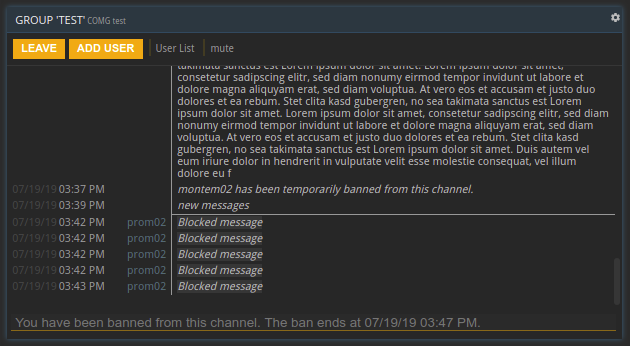 I also (finally), added a button to delete a message. Until a message is a couple of minutes old hovering over it will reveal a delete button that replaces the message and shows a system message indicating who has deleted the message. We also created a chat moderator role that we can assign to players that allows them to delete inappropriate messages. We have not yet decided who or when will receive that role, but it is nice to know that we have the feature ready should it be needed!

Last but not least we now limit the amount and size of chat messages one can post to a channel in a given time interval. If someone posts too many or too large messages the messages will get deleted and a strike is issued. Once enough strikes within a set period are accumulated the player is automatically and temporarily banned from the channel. Repeated offenses will result in longer ban durations. 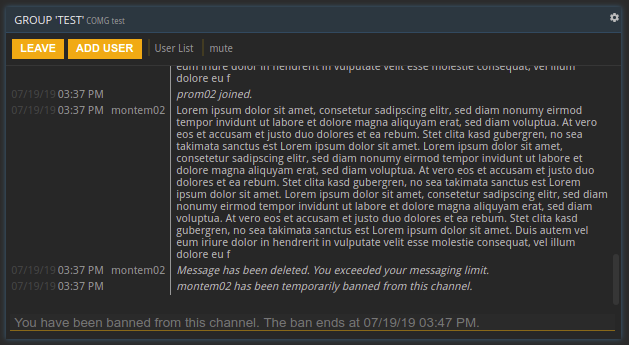 So far we didn't have many issues with spammers or offensive messages and we very much hope it stays that way! I attribute that to you, our player community and you should be proud! Thanks!