Today, we'd like to tell you more about the Locality update and then take you beyond, both in time and space, to the following one, which will attempt to encourage setting up new colonies in yet untouched systems.

I am still working my way through all the contract-related changes that are necessary for the release of the Local Markets feature. This week, I implemented contract condition dependencies. Sounds complicated, but really isn't from a company perspective. For example: If company A creates a commodity selling ad and company B accepts the ad, a contract is formed. That contract has three conditions: a material provision condition, a payment condition and a pickup condition. The payment and pickup conditions are the responsibility of the buying company B. The material needs to be provisioned by company A. Of course, the buying company can only pick up the commodities once A provisioned them. So the pickup condition depends on the provisioning condition.

I changed the layout of the contract buffer to reflect that. Here is the old contract view where the respective conditions are sorted into tabs: 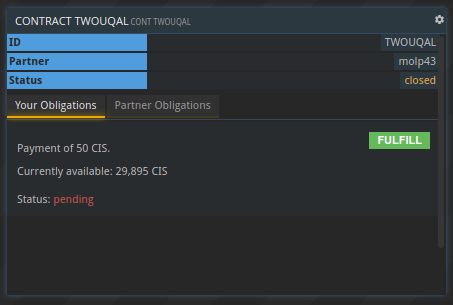 The tabs make it difficult to get an overview of the whole contract. So I changed the layout into a table:

As you can see, the pickup condition has a reference to the provision condition in the column named 'depends on'. This screenshot is from the seller's perspective and no further actions are necessary on her side.

I also started to implement condition deadlines as Local Market offers will have pickup and delivery conditions that are only valid for a certain amount of time. I will show you next week what that will look like!

With lots of catching up to do after my vacation and customer projects temporarily taking priority, I didn't get around to much coding for PrUn just yet. But aside from the actual implementation of stuff, I am involved in planning the release after the next one.

As an avid reader of the devlog, you will know that Michi has been making great progress on the Local Markets (LMs) feature which represents the major new addition of the next release. The LMs are supposed to make colonizing remote planets a bit easier by not requiring every player to do supply or sales runs to commodity exchanges. It's one of the first changes dedicated to motivate players to "move out" into non-core systems.

Once the LMs are released, we want to go several steps further and add features that not only make "moving out" easier, but also a lot more attractive. We want people to want to settle in remote systems and to build up new colonies. And as it turns out, this is a lot easier said than done. Besides the usual chicken-and-egg situations, there are some fundamental balancing issues that we need to work out. For example, if we want to seed remote systems with new materials for new, complex and highly desirable equipment (say, player-built space ships), how do we make it possible and worthwhile for players to build up the required supply chains if the only way they can make money is by having the whole of the supply chains finished? It's very similar to the issue of previous alpha tests in which Tier 2 materials were only attractive to Tier 2 players, so you had to build up the supply chain and the demand at the same time. Just on a whole different level.

As you might have guessed, this is a huge topic that's going to keep us scratching our heads and scribble on white-boards for quite some time to come. :-)

First of all, I'd like to once again thank everybody who participated in this week's player survey. The current universe went live about two months ago, and we wanted to check in with everybody to learn a little more about our players' plans, problems, and wishes. The survey is now closed and a bunch of it already went into The Filter™, our new internal system of deciding which bits of feedback end up on The List™. Some of it is going to be evaluated by our game designer Alex, who will decide if any balancing tweaks need to be part of our next big update.

Speaking of which, Locality, which brings about the Local Markets described above, might hit the current universe fairly soon. Whenever it does, I'll put on my PR Manager hat again. I've been dealing mostly with Community Management lately (including commissioning the supporter badges!), which is great, but I think it will be in everybody's interest if I bring in some fresh blood to exp... I mean new players to help out!