Michi made a lot of progress on the upcoming Local Markets feature which in turn relies heavily on the Player Ratings feature. Martin was supposed to work on the latter but got distracted by improving the financial charts in the game. So we have to wait a little bit longer until the two branches converge. Only a matter of weeks, though!

The work on the local markets feature continued this week. Time to show you some early work-in-progress screenshots!

A local market is basically a blackboard with classifieds. Everyone owning a base on the planet can post ads to the local market. The character in front of the ad constitutes the minimum rating your company has to have to in order to accept that ad. Ratings will go from F to A, A being the best achievable rating. Besides these there are also the P and U ratings: pending and unrated. 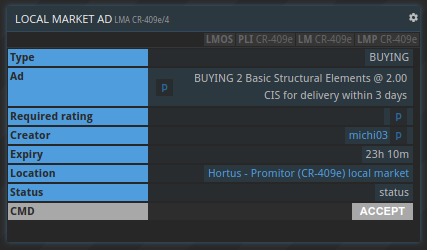 Clicking on an ad reveals a bit more information, for example who created it (including the companies rating), where it was created and how long it is valid. Depending on what the creator set during the creation of the ad it might be visible between one and 30 days. Finally there is a button that allows to accept an ad and forms a contract between the creator and the company accepting the ad. Once the ad has been accepted the contract parties have a certain amount of time to fulfill their respective contractual obligations, like paying, delivering or picking up goods.

Of course there is a similar command as the existing FXOS and CSOS to show the list of your own ads and the ads of other companies you accepted.

I kind of went off on a tangent this week. My original plan was to get started on the Player Rating feature but I wanted to get a few minor improvements of the price charts out of the way, first. As it's often the case, that took a lot longer than planned for a variety of reasons. But this is what the charts look like now: 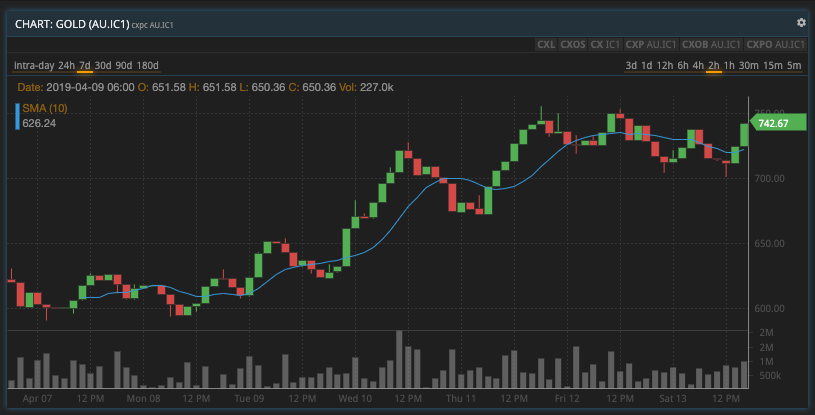 The most notable changes are these:

The charts are still far from perfect, especially in cases with very little data. But I feel like I've spent enough time on them for the moment and should focus on actual game play again :-)