With the crew reunited, everybody is chipping away at their own list of things to do before the first game world reset since First Access started.

I continued to work on the new company creation screens this week. I focused on the market information displayed in the lower right corner: 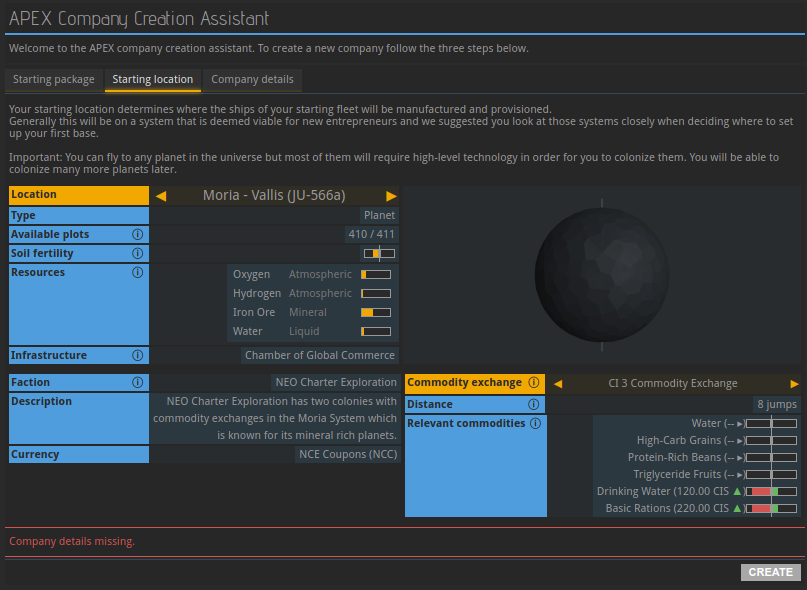 We want to give the players some insight into the current market situation and opted for a list of relevant materials (depending on the chosen starting profile). The players can click through a list of commodity exchanges and see the distance to their selected starting location. For each relevant commodity we show the current price indicator and a bar with demand and supply.

We showed the concept to some players and the opinions about it are divided: While one half thinks this is enough information to get new players started (and not too confused in the process) the other players think it isn't enough information at all and we should incorporate more charts. I personally think that we should give it a try as it is and adjust when needed.

After months of dedicating the majority of my working hours to Prosperous Universe, it was about time I showed our existing title AirlineSim some love. Hence my absence from this devlog for the past two weeks!

While not diving back into PrUn work right away, I did work one several backend tools used across all our projects, primarily backend tools that will support our team in diagnosing and helping with undelivered emails and similar email-related issues. I also looked into our revenue and user activity statistics and thought about ways to extract and analyze them going forward.

Not the most exciting stuff, but I feel like that's at least 50% of my job around simulogics these days…running the infrastructure - like email handling, payment systems, accounting, taxes, you name it - so we can operate our games, actually charge money for them and do so in a way that we don't get in trouble with the authorities ;-)

I'm also back! I've had a crazy start of the year with so much non-work stuff going on that I had to virtually skip the past two weeks as well to get things sorted out. However, I'm back for good and happy to see that the community in and around the game is still as active and awesome as I left it.

There are some things I did get around to, such as scheduling a new live stream just before the upcoming game world reset. It's going to be on February 19th at 7 PM CET and there's going to be an official announcement very soon. I've also been getting involved some more in game design again, as I read through the community's feedback on all our channels, passed it along and discussed it with the team. A lot of it will probably be discussed on the live stream as well.

I've also started writing descriptions for all materials in the game. It's not an urgent issue by any means, but I personally feel like the game is lacking in flavor somewhat, and for people (such as myself) who are at least as interested in the setting and story as they are in the economy side of things, some world-building snippets here and there will go a long way in making the game feel more alive. I have to admit I somewhat underestimated the task since many of the materials are fairly specific products I know very little about, so there more research involved in this task than I anticipated.

Last but not least, there is going to be a pretty massive marketing thingy in about a month (right after the reset) which should bring about swathes of new players, so plan your cartels now! ;)