With mere weeks to go until the next, massive test run, the team is working on all fronts to get the game ready for First Access.

With the upcoming First Access release, everyone is working feverishly to finish up all their tasks. I got lucky this week and could finish two things:

The backend of the key server is done. Since Martin is currently working on the integration of our billing system, the user backend, the key server and the game (short: the hub :)), I expect that a few issues and minor changes will be inevitable, but hopefully nothing major.

The other finished thing is the Corporation Headquarters feature. Here is its short description from the game:

Corporation Headquarters are the first project a newly founded corporation has to built in order to function properly. Headquarters have to be built on a planet outside faction space and will provide a 10% production boost to all members on that planet.

The HQ can now be built by the members of a corporation. The building process works like a planetary project (meaning everyone can contribute building materials) but is obviously limited to corporation members. As soon as the HQ is finished, it grants a 10% production bonus on every production line on that planet, independent of the industry. 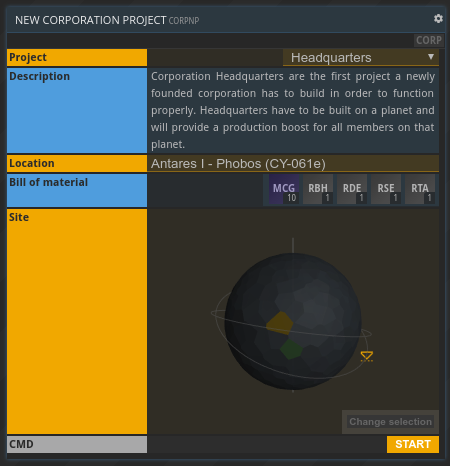 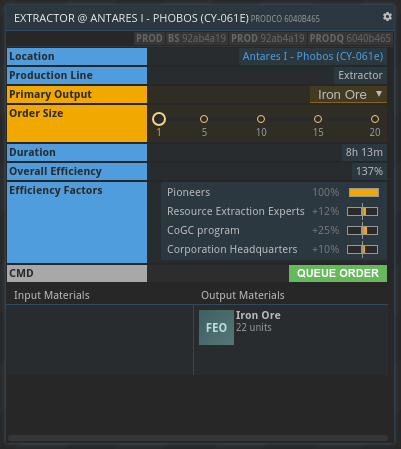 A production line with the Corporation HQ efficiency modifier

As Michi already mentioned, working with a hard deadline for a big release seems to somewhat increase our productivity. But still: Given the length of our to-do list I won't spend much time on the devlog this week and give you the quickest rundown possible. My work on the "hub" continued and I

And with that, back to work. See you next week!

This week, I've been writing tutorials! As I mentioned before, the upcoming test will feature a wiki alongside our usual video tutorials, for those who prefer reading to watching. So far, I've been adapting the existing ones to the written form and creating gifs and pictures to support the text. Once that's all done, I will start creating new tutorials - both videos and texts - for all the new content.

Beside the wiki, I've been working on our so-called support tier matrix. You might already know that we'll be avoiding microtransactions in favor of a monthly subscription fee for premium features. This means that we're capping strictly what each player will be able to spend each month, which is sort of a bad business practice. Hence, we decided to give players who want to spend more the possibility of purchasing supporter packs, which are essentially the same thing as Kickstarter tiers. We've been doing our best to avoid pay-to-win rewards and have filled up the goodie bags with cosmetic rewards instead, which will increase a player's prestige in the game and community rather than providing an unfair advantage. Coming up with and balancing these rewards has taken up a good chunk of my week.

Last but definitely not least, my article on 80.lv was published and made quite a splash (for our standards). It's been generelly well-received and brought a bunch of attention to Prosperous Universe and new players to our forums, which is great. If you haven't read it yet, check it out if you're interested in the history and inspirations behind the game as well as the question: How to make a game that's just a UI?