While Martin is still wrapped up in moving to another city, Michi has been making major progress on the "corporate projects" feature, and Julian wrapped up two bigger tasks.

Last week I promised to show some screenshots of the corporate projects and here they are: 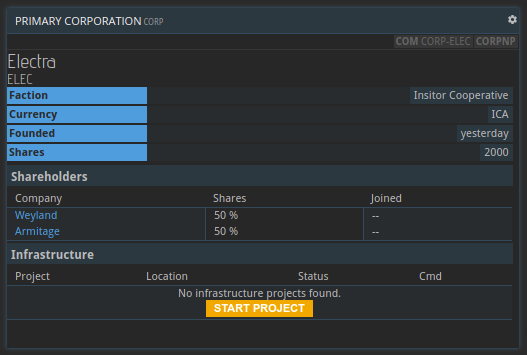 This is the revised corporation overview. You will have access to this screen if you are a member of this corporation and if this is your primary corporation. For the time being a player can only be in one corporation (the primary one), but eventually it will be possible to buy shares from any corporation.

The screen shows some basic information and a list of shareholders. We will probably make the list an extra tile or page-able in the future to avoid that the tile grows too large for corporations with a lot of members.

The last section contains a list of all projects (planned and active) of the corporation. Right now it is empty, but the button will lead us to the next screen where we can create a new project! 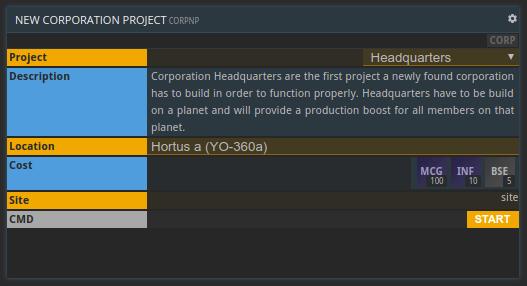 In this tile the players can start a new corporation project. Right now I am working on the Corporation Headquarters, but we will add more projects in the future.

To select a location for the HQ the players can enter any planet or system name to get a list of possible locations. This works just as the destination selection for ship flight.

One part is not implemented yet: The HQ will get its own site on the planet and the players need to select one to start the build process. I want to display a map similar to the planet surface map, but didn't manage to finish it in time for this devlog.

There's not much new to report this week, as I have continued and concluded two tasks I already talked about over the previous weeks: First, I finished my research on possible SEO measures. After talking to a friend on mine who works as an SEO manager, I now have a pretty clear idea of which SEO improvements we should make to our websites and how much we can hope to get out of them. I'll pitch the whole thing to the others tomorrow.

Secondly, I've finished creating the new feature spotlights! I added text to some longer ones to clarify what's going on. I think these gifs are a cool format to get people little glipmses into what the actual game is about, which is a little hard to convey to complete newcomers. Here's two new examples:

An accelerated glimpse into Prosperous Universe gameplay! To start producing things in your new base, you need: 1. A producing building. 2. Nourishment for your workers. 3. Housing for your workers. Luckily, you can get all of it at your local market.

No matter if you need an introduction when you first use APEX or if you want to learn more at a later point - our video tutorials are always there for you.