Things have picked up the pace this week! Julian got his hands on a new build of the game, which he promptly showed to the public over the weekend. Martin has been involved with the material tree, and Michi is finally getting around to the long list of feature requests that have been piling up since the start of Alpha #5.

I am back from a short but pretty incredible vacation in South Africa! After plenty of catching up with admin work I got around to a few minor things around Prosperous Universe:

I then went on to do some code review of a few things Michi coded in my absence and that he wanted me to check out.

Not much to report but pretty good given that I essentially had an afternoon of time this week. Speaking of limited time: I have a lot of external contract work and a move to a new city coming up. So until I can conclude my part of the "Impressions from around simulogics offices in the making" mini series with a final impression of my new office towards the end of October, expect to see a little less content from me. I'm sure Michi's and Julian's reports will be as exciting as ever!

In the team-internal area of the Forums, we have this big list of issues and feature requests that Julian compiled from your feedback a while ago. Since we are closing in on an new alpha test I figured it couldn't hurt to fix a few things.

Besides a lot of really small issues I redesigned the ship tile. This is what it looked like before: 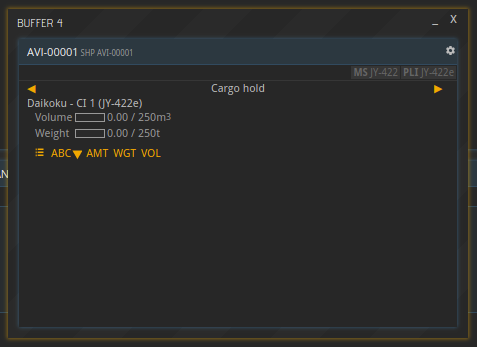 Up until now this tile consisted only of the ship inventory and (accessible via the carousel buttons) fuel tanks. Moving fuel between the inventory and the tanks was really complicated. The tile could be opened by clicking on the transponder code in the fleet tile:

Since ships have quite a few interesting properties (and will have more in the future) I created a complete new ship tile: 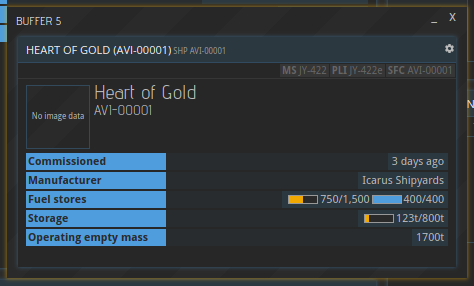 I added some basic ship data and a quick overview of the fuel and cargo stores. Clicking the cargo store will open a new buffer that shows its inventory. The same goes with the fuel store: A new tile will open containing both fuel stores. Moving fuel between the cargo store and fuel store is now as simple as moving items between any stores.

Ships can now be renamed, a feature that has often been requested. :)

I added the cargo store widget to the fleet overview as well:

Besides these changes, I helped out Alex with the world editor and I set up a local test server so Alex and Julian could test some of the features we wrote in the last weeks.

This week, I was finally given access to the new game build that includes all the new features we've been talking about since Alpha #5 in April. During all that time, I hadn't gotten my hands on a newer version of the game because it was so heavily under construction. Now, though, the new features are really taking shape. I'll tell you a lot more about that next week!

I think I mentioned it before, but in case you don't know: I'm pretty active in the local game development scene. It all started when I co-founded a group called Game Dev Saar over a year ago, which, among other things, showcases games from my home region now and then. It happened again this weekend, specifically at a pretty cool event called SaarCon, where we (i.e. Game Dev Saar) had a table to ourselves: The guy behind me at the table (right above the screen showing our concept art) is Felix, founder of Radical Fish Games. He brought their recently released title CrossCode. Outside our table, though, most games weren't digital at SaarCon; the hall was packed with people playing board games, tabletop games, and some pen & paper games. There were tournaments of all sorts, a Cosplay contest, and much more. The event went on from Saturday morning until Sunday night without any break, although we didn't make it all the way through. We had a blast, though, and I met quite a few people who were enthusiastic about Prosperous Universe. Last but not least, I even got to use my old Magic: The Gathering deck again. (I won. Heh.)