Unbelievable: we are writing devlog #150! That's quite a figure and an important milestone! Since Martin is currently enjoying his vacation and I think the honours are all his to write the 3-year-in-development celebratory speech we are going to postpone that until october when it's three full years! In Martin's absence Julian has started Phase 2 of his elaborated marketing plan and Michi is hunting bugs to prepare for the next alpha.

Since the CoGC feature is done, I am now looking into smaller issues and tasks that need to be done before we can start the next alpha test.

I started this week with investigating a bug that has been in the game for quite some time now. If I remember correctly it was reported in the third alpha for the first time. Here is the problem:

If you buy something at a commodity exchange and don't have any storage there (e.g. no ship or base) than a pickup contract will be created. If you send a ship over to the comex you can open that contract and click 'fulfill' and the goods will be transferred to the ship. If the things you bought are too big to fit in the cargo hold of your ship, the contract cannot be fulfilled and the the goods are essentially stuck.

Fixing this was way more complicated than it sounds, since there is quite a bit of code involved in the handling of contracts. After studying the code for a while, I am unfamiliar with it since Martin wrote it, I decided to go for a minimalistic solution: The fulfill button is still there, but it will always transfer the largest amount of commodities possible and then mark the contract's condition as 'partly fulfilled'. That way players can either send multiple ships or do a few roundtrips to get all their goods.

In the UI it looks rather unspectacular: 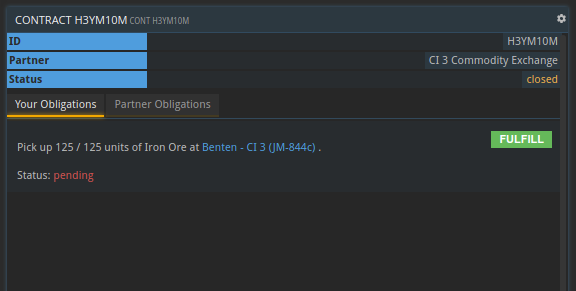 The newly created pick-up contract for 125 units of iron ore. 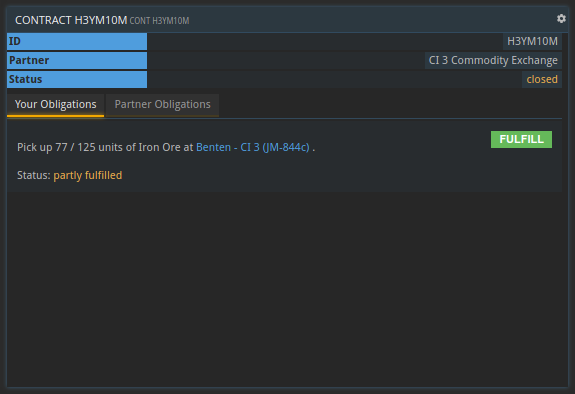 The condition after picking up some of the iron ore. 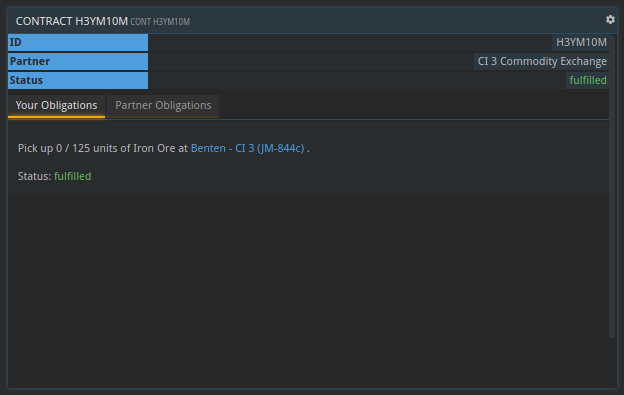 The condition after everything has been transferred.

The past week has been tightly packed as I rushed to finish up some things by the 150th devlog milestone in an attempt to finally close what my personal roadmap labels "Phase 1". I'm not 100 % there yet, but that's mainly due to other people I'm waiting for, so I'm not too upset about it. Phase 1 encompassed all that needed to be done in preparation for Phases 2 through 5.

In other words, Phase 1 is pretty much all I've done so far: Researching our (possible) target group(s) by various means including surveys among our existing followers. Helping to set up Alpha #5 including the creation of our video tutorials. Preparing and starting to execute a strategy for a regular posting schedule of game-related content in different places all-over the Internet, which I took a long time gathering. Getting the game on all relevant MMO lists out there (although some are taking their sweet time to include us). Showing the game at smaller, cheaper events to test what works on exhibitions, and to gather feedback from industry colleagues. Updating (or helping coordinate the update of) our promotional texts, websites, and corporate designs, the conclusion of which will be the publication of our new terms and conditions I finished translating this week. Most importantly, however, I've gathered an extensive and detailed list of websites, journalists, blogs, YouTubers, streamers, and even clans. Some of them will be contacted before our next test run, the rest right before the official launch. The goal of this phase has been to set up and streamline our PR campaign while already building up our newsletter list, which will be the most important means to let players know when the game officially starts.

Phase 2 will be all about the next and improved test run, which will be the start of our closed beta. These are the things I'll be concerning myself with throughout the coming months: finishing and publishing our teaser trailer, helping to set up key-based access to the game, reaching out to parts of my contact list (to organize key give-aways among other things), creating a new batch of tutorials for all the new features, and getting the Prosperous Universe wiki ready, including written tutorials for those who prefer reading to watching videos. The start of the next test, which is ideally going to be in two months, marks the beginning of Phase 3. Plenty of things to do until then, so October and November will be very busy!

In case you missed it, this week's feature spotlight has been the Planet Info window:

This screen provides you with information about a planet: Is it rocky or gaseous? Which resources can be found here? Is it fertile? Are additional measures required to shield structures from the environment? Choose wisely where to set up shop.