While Michi has been weaving the effects of the Chamber of Global Commerce into existing features, Martin is still finishing up the account management system, and Julian is working to increase the game's visibility on social media.

Last weekend I must have caught a cold at a community event for our other game AirlineSim because on Wednesday I started feeling sick enough to follow past me's advice and take some time off to rest. Due to this and contrary to my experience described in devlog #88 (seriously…that was 60 devlogs ago?!) I started feeling a lot better by Friday and I actually was able to get some (light) work done, mostly the finishing touches to the rewritten account management system and the deployment of said system in our test environment. But that's about it…I guess being somewhat healthy is better than an additional paragraph in the devlog, no? So see you next week!

I am back from my vacation and continued working on the Chamber of Global Commerce right away.

Take a look at the CoGC overview: 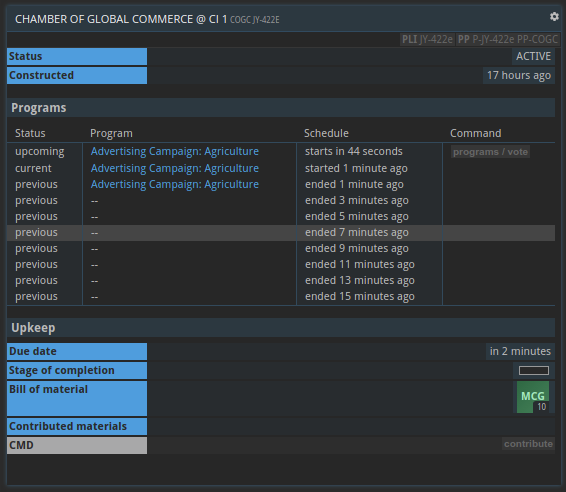 There is the new "upkeep" section at the bottom. The CoGC requires a periodical upkeep to function properly. Every 30 days a new upkeep cycle starts and if not all materials are contributed by the players owning a base on the given planet, the CoGC will go into strike. If on strike, the voting mechanism for economic programs will still work, but they won't have any effect. The amount of materials necessary for each upkeep cycle depends on the amount of bases established on a planet.

The economic programs that are being voted for now finally have an actual effect on the production. They are being displayed in the production line order management as an efficiency factor: 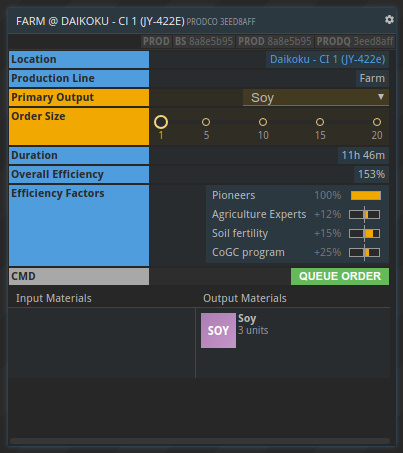 The Chamber of Global Commerce feature is now almost complete. The second to last missing piece is implementing the effects of programs that increase the workforce satisfaction, and the final bit is figuring out how expensive a CoGC should be, which materials are necessary for the upkeep and the concrete factors for efficiency and workforce satisfaction. Since Alex is currently redesigning the material tree and these things are heavily dependent on the materials and resources, the implementation will have to wait a bit.

Maybe you remember that I sometimes do freelance work as a composer. Well, I'm once again in the middle of a project, which is why I took last week off to write some music. This week, I dialed it back and got some work for Prosperous Universe done.

Besides continuing the translation of our legal texts, I started scheduling different kinds of posts - several per week until our next test's release, which we have planned for late November. I'm putting quite a bit of work into making them flashy; for instance, the first series I've been preparing consists of stylized gifs made from in-game material to highlight certain features. I've been poking around different ideas for regular posts, but I'll get to that once the feature spotlight series is done:

The APEX interface is all you need to bring your company to prosperity. This highly customizable management tool will allow you to run any kind of operation from anywhere in the known universe.

Commodity Exchanges allow licensees to trade their goods on certain planets and space stations. Buying and selling commodities in the right place, for the right price, at the right time will make all the difference in your company's success.

I'm scheduling these for Wednesdays to make use of #indiedevhour, and sometimes on Saturdays for #screenshotsaturday. So far, the reception has been pretty positive. More formats are coming next week!