In this week's news, our redesigned studio website is now live and Corporations are getting their own chat rooms as well as their first large-scale cooperative feature: planetary projects!

As you might remember from last week's post, I started working on the first actual benefit of Corporations: Having a private chat-room that all shareholders are automatically added to.

That sounds easy enough, but I quickly encountered two annoying problems. Firstly, the chat code is one of the very oldest bits of code in our code-base. We basically used it as our proof of concept when we designed the initial cluster architecture for the game, so many improvements to code style and structure that were available when building later features are missing from these parts of the code (let alone what will soon be three years of development experience on our part). Long story short: Plugging on the functionality needed for the automated chat channels proved to be a bit more challenging than I had planned.

Which leads me to the second problem. When faced with the challenge of editing code you have a hard time understanding, it's of great help to have a suite of automated tests that make sure that any functionality that's been there before still works as expected after you've made your changes. While we fortunately do have such tests in place, they were running so slowly that it was cumbersome to use them. And having to wait for minutes every time you want to run the tests obviously hinders development progress. So I spent some time on top of my allocated budget (aka on the weekend) to look into these performance issues. They are not quite solved yet, but there are improvements. To be continued…

I made some progress on the Chamber of Global Commerce feature this week: 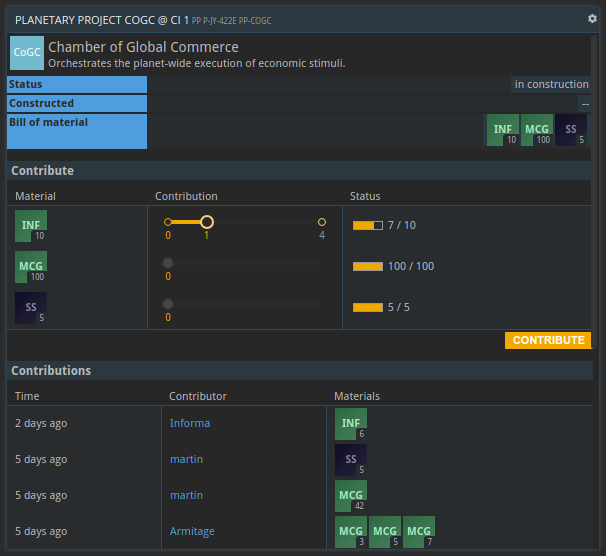 This is the tile where players can contribute towards the completion of a planetary project, like the Chamber of Global Commerce. The upper part shows some general status information including the total building costs. The part in the middle is a new contribution widget I wrote. Every material necessary in the construction of the project is represented as a line with a slider. The players can then decide how much of their goods they want to contribute and also see how much is left until the project can be constructed.

Once they made up their mind and hit the contribute button, the selected commodities will be removed from the personal inventory and added to the project. Finally, a new entry is added to the list at the end of the tile and everybody can see who has contributed which materials and when.

I spent most of my time this week working from my new office, and so far it has provided me with the productiviy boost I was hoping for. I got a bunch of e-mails ready to get Prosperous Universe on as many game lists as possible, and all our existing entries have been updated with new texts and images. I'm still holding back on quite a few (already composed) e-mails because I'm waiting for the new Prosperous Universe website to drop first, which is happening next week.

This brings me to the biggest news of the week: Our game studio simulogics is now finally and officially a game studio! In truth, it has been one for a long time, but our studio website didn't reflect that. (We used to do a lot of contract work and developed our games on the side.) On Wednesday, we released our overhauled homepage design - check it out! 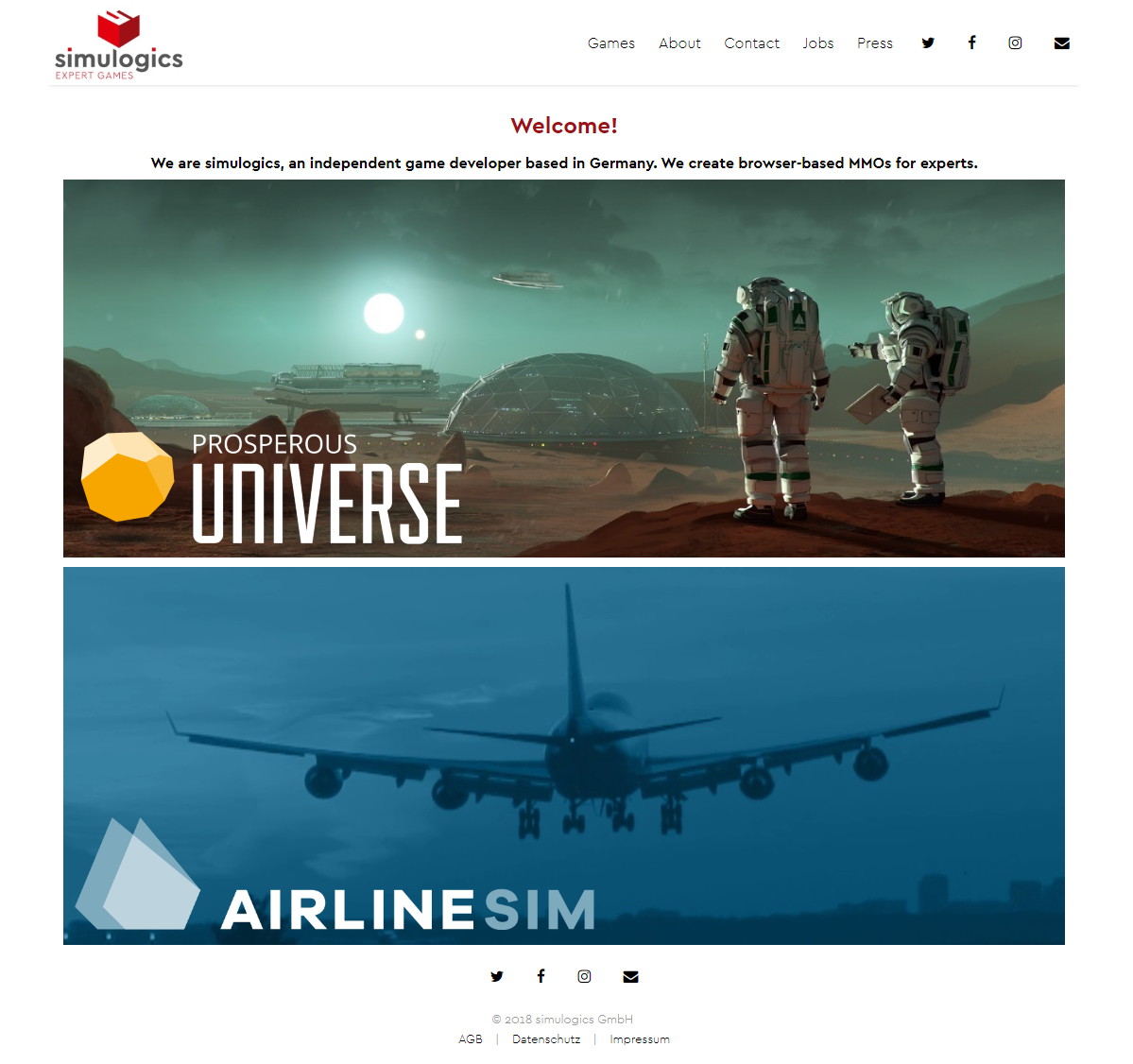 Lastly, of course, I'm getting ready for the upcoming industry events. We're exhitibing Prosperous Universe at devcom's Indie Area on Sunday and Monday, so be sure to say hello if you're attending. I'll also be at Gamescom from Monday to Thursday next week. We're not exhibiting there (this year), but I'm always happy to chat! You can probably spot me around Indie Arena Booth (Hall 10.1 Booth A020) most of the time, I'll be wearing my hand-made Prosperous Universe patch: