Martin is taking some time off to adjust to the new life situation, Julian is getting the overhauled texts and homepages ready, and Michi's focus has shifted from space stations to orbiting space ships and improved maps.

This week I finished the work on the navigation code for space stations. One of the last parts was to make sure that the navigation from and to stations around planets and around the sun are working properly.

I then started to work on a change that I was looking forward to for a long time now: polishing and improving the maps. We are still not ready for a complete overhaul, but I started to work on the technical foundations. Ultimately we want the maps to be more interactive and to show more information. I started with the planet surface map that is located in the planet information panel: 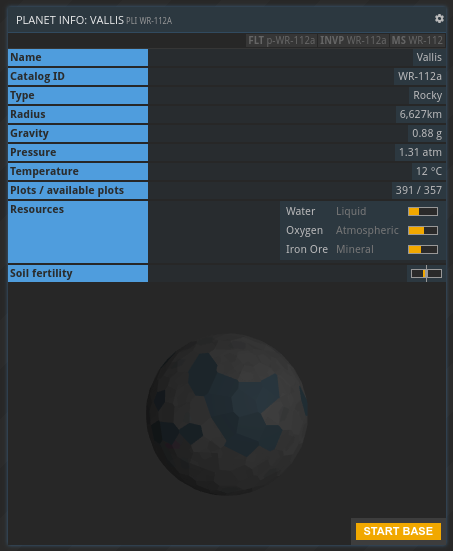 Players can already see their base, the commodity exchange and other players' bases but there are no ships, no space stations etc. Also nothing besides the player's own base is clickable to get more information. This will eventually change and I made the first steps into that direction.

In the new flight model, ships can land on planets, but also orbit them, so I started to display the ships and their orbits:

Right now only the player's own ships can be seen, but I'll add other traffic and space stations as soon as I can :)

There's nothing I could write to remotely touch on the awesomeness of molp's entry this week, right? I'll make it quick, then: All texts for our new homepages and other online appearances are ready to go, and I've started to tackle our company page's overhaul. Plus, we're preparing a big round of questionnaires and interviews with our testers, so get ready to hear more about that very soon if you've been playing the alpha. I'll have a lot more to report next week, when I'm finally done with the ongoing freelance work and start to catch up on my working hours for Prosperous Universe. Talk to you then!