After receiving some great player feedback, shipping ads will be implemented on commodity exchange stations in the near future!

With Early Access out of the way, I finally had some time to look into smaller issues and bugfixes. We will release a maintenance release at the end of the month including many of these fixes.

Apart from that, we received a lot of feedback on the new universe (like rain's excellent economy analysis) and would like to thank you all for that!

Many players mentioned that it doesn't make much sense to have shipping ads (once the LMs are back) that are unable to be transacted between commodity exchanges, since they are currently limited to either the origin or the destination of a shipment needing to be the Local Market where the ad was posted. With the upcoming maintenance release, we will tackle that problem by adding Local Markets to the four comex stations.

These Local Markets will just pop up and won't need to be paid for by the players. They are special in the way that everyone with a PRO license will be able to post shipping ads there (going to and from the station). The standard fees will apply and will be collected by the respective faction. These LMs will only allow shipping ads to be posted. 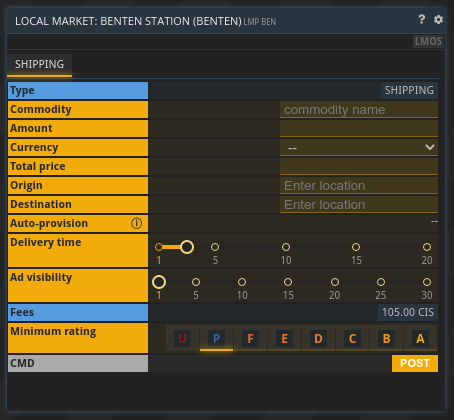 We strongly believe that adding LMs to the stations will make the lives of players specializing in shipping or trading much easier. Not only because it is possible to ship from station to station, but also because these LMs will likely become the go-to place to post and look for shipping ads that are relevant for the respective faction area.

I can't go into too much detail yet, but we discussed the new-player experience a bit more and decided to do updates in three major areas in the near future:

I realize this isn't the most exciting news to you Prosperous Universe veterans out there, but it hopefully will be in the long run since fewer players will bounce off the currently extremely self-driven start of the game and we'll therefore expand our potential audience. :)

Last week was spent largely on getting influencers sorted out for the coming weeks. We are happy to announce that Spacedock will be coming out with a 3rd video for us on Tuesday. We will also be collaborating with some other YouTubers this month and I think you will be excited to find out who they are!

I am also really looking forward to the UI changes that Fabian is working on and I'm working with Julian on a Transmission 0 video that will work with a "How to Get into PrUn" theme that will benefit new players. I want to produce some kind of content in the meantime that will help new players before the tutorial videos can be remade since they are also dependent on the UI changes that are in development. Transmission 0 will focus on things like shipping contracts and other things that would be useful to new players but aren't immediately obvious to them. Send me a message on Discord if you have any ideas or suggestions!